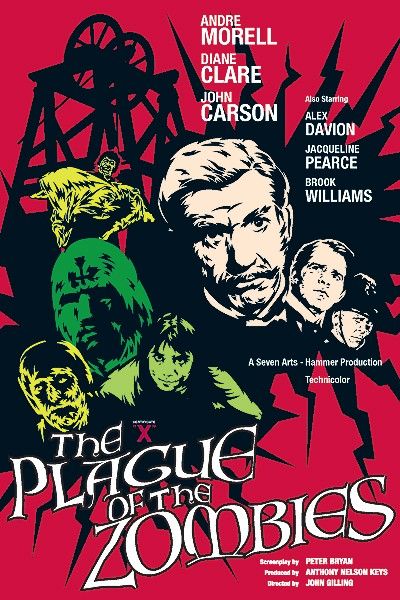 Andre Morell’s character, Dr. Forbes, makes a very unusual house call at the opening of “The Plague of the Zombies.” His old student, now practicing in a small (Victorian era) Cornish village, is mystified by the recent outbreak of deaths in that town, and even his wife, Alice, is starting to exhibit some strange lethargy. After Forbes arrives to help, he and his friend uncover a mix of voodoo, grave robbing and the undead, in this lesser known Hammer title that certainly deserves a greater renown. And thanks to the fine folks at Anchor Bay, this film’s popularity may soon spread beyond its current cult reputation. “Plague” features an intelligent script, fine acting, solid photography and great atmosphere. Andre Morell’s doctor makes for a very reassuring action hero, despite the actor’s age (he was 57 at the time this picture was made). The film boasts three very chilling scenes: the first, nighttime appearance of a zombie on a hillside; the much-celebrated dream sequence; and Alice’s rising from her grave. The smile on actress Jacqueline Pearce’s face in this last scene is just haunting. Though marred by a somewhat disappointing finale, the film remains a minor horror masterpiece and one of the scariest works that I’ve yet seen from the House of Hammer. This movie would make a wonderful double feature with the similarly themed “White Zombie” (1932), or with another Hammer film made that same year (1966), “The Reptile,” featuring Pearce again and the same director, John Gilling. Any way you watch it, though, the film is a real winner.