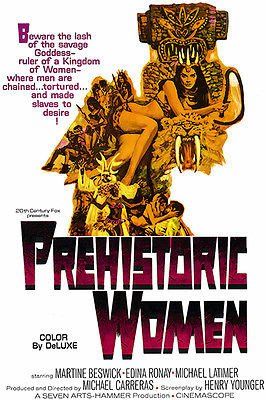 In 1966, Hammer studios gave the world its cave-girl classic One Million Years B.C., which featured a bevy of fur bikini-clad beauties, including the pneumatic Raquel Welch and the lissom Martine Beswick. The next year, obviously unwilling to consign a wardrobe full of skimpy animal-skin costumes to the skip, they also made Prehistoric Women (AKA Slave Girls), a ridiculous jungle adventure which saw Beswick once again playing a wildcat with a nasty streak.

Written and directed by Michael Carreras, Prehistoric Women is technically one of Hammer’s weakest efforts: a poorly scripted studio-bound clunker with an unbelievably daft plot and some mind-numbingly bad performances. However, it is also one of those rare films that manages to be consistently entertaining simply thanks to its unrelenting awfulness.

Michael Latimer plays David Marchand, a jungle guide who is taken captive by savage, white rhinoceros worshipping natives who intend to sacrifice him to their god. Just as he is about to be killed, David touches their sacred rhino statue, which freezes time and opens a doorway into a kingdom where a tribe of big-breasted, brunette beauties, led by the heartless Queen Kari (Beswick), have enslaved a tribe of equally-buxom blonde babes.

After falling for a slave girl named Saria (Edina Ronay), and witnessing Kari’s cruelty, David vows to help the blonde women overthrow their oppressors, a task made all the more difficult when he is clapped in irons for spurning Kari’s sexual advances.

Featuring loads of native song and dance numbers to pad out the action (including a nifty solo routine from Beswick, who might not be the prettiest of Hammer’s women, but certainly has one hell of a hot bod!), the occasional cat-fight, a gloriously naff jungle battle, and a silly surprise ending that makes no sense whatsoever, this film is sheer nonsense from start to finish. But it’s fun nonsense, which earns itself a rating of 6/10 from this easily pleased viewer.