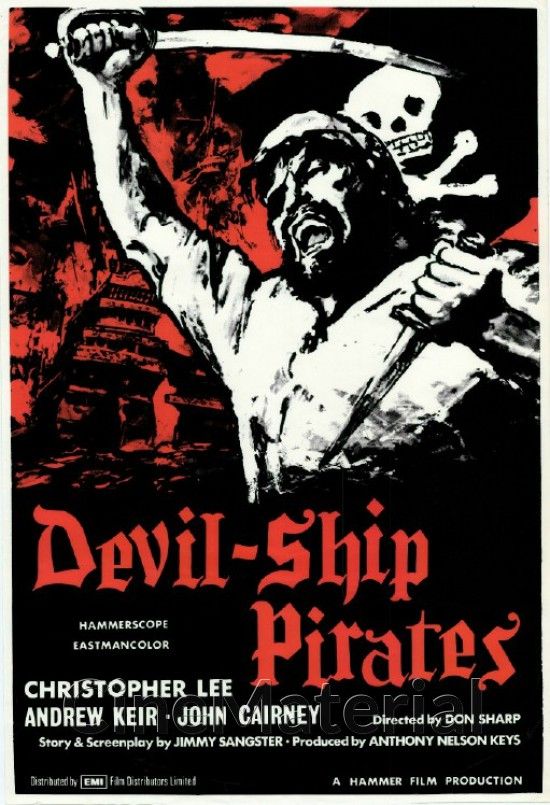 A great title, but THE DEVIL-SHIP PIRATES is not one of Hammer’s best films – or, indeed, one of its best swashbuckler films. It’s a singularly slow paced production that feels slightly lethargic, despite lots of incident in the plot and a storyline that works despite the absurdity of it all (think of it as a 16th century spin on WENT THE DAY WELL?). I think the main problem is that it all feels a bit genteel and twee, and never as genuinely menacing as it should be.

Still, even second-rate Hammer is still better than its rivals, and this is the kind of film to while away a rainy afternoon. It features typically lush and vibrant cinematography, that makes even the low budget sets look grand; some decent special effects, including a full-size ship; colourful costumes and a handful of good action scenes, too.

Towering over all is Christopher Lee as the chief pirate, a sinister Spaniard with a fine line in swordplay. Lee growls and barks his way through a pantomime performance as dastardly as Alan Rickman’s in ROBIN HOOD: PRINCE OF THIEVES, and the film garners a lot of goodwill on the strength of his performance alone; he supplies at least half of the entertainment value.

As is usual with Hammer, part of the fun comes from spotting the familiar faces while watching. There are fairly meaty roles for Andrew Keir and Michael Ripper here, playing villager and pirate respectively, while Suzan Farmer (of Dracula, PRINCE OF DARKNESS and RASPUTIN, THE MAD MONK) once again finds herself menaced by Lee. THE DEVIL-SHIP PIRATES is no classic, but Hammer fans will enjoy it.