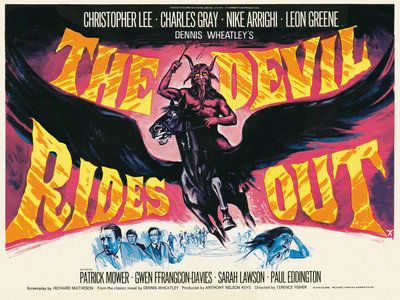 Very cool Hammer film from the great Terence Fisher with Christopher Lee playing the good guy for a change. Lee plays the Duc de Richleau who, along with his friend Rex Van Ryn (Leon Greene), rescues a late friend’s son and a young woman from a Satanic cult led by a powerful man named Mocata (Charles Gray). Now holed up at a country estate, de Richleau and Rex must fight off Mocata and the forces of evil.

One of my favorite Hammer films. The screenplay comes from Richard Matheson, adapted from a novel by Dennis Wheatley. Fisher’s direction is terrific. The movie has a great 1920s period look and at times a very creepy atmosphere. The cast is excellent, with Lee giving one of his best performances. Charles Gray gives a subdued turn that makes him all the more menacing. I really like this one and rewatch it more than most Hammer movies I own. It’s an exciting, enjoyable movie that will surely please Lee and Hammer fans.