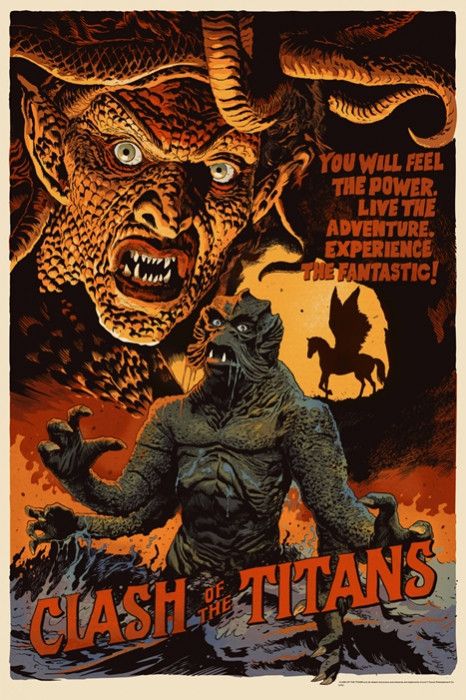 This film opens with a woman and her child being shunned by her kingly father and the city he represents, and banished to the depths of the sea. We soon find out that this child is the son of Zeus, king of Mt. Olympus and king of the gods. Zeus then releases this terrible beast called the Kracken to destroy the city. The child is saved and grows to manhood. His name is Perseus. The film is then a chronicle of Perseus’s adventures as he battles the deadly, deformed Calibos, giant scorpions, a two-headed giant dog, and the evil Medusa herself, as well as the mightiest of all titans, the Kracken itself. We also see him befriend the magical Pegasus, and meet Cheron on the river Styx. This movie is great fun and makes all these mythological names come alive. The credit for this goes to the wonderful stop-animation work of Ray Harryhausen, in his (unfortunately) last film. Credit also goes to the wonderful supporting cast of British stage nobility playing the gods and such, Laurence Olivier plays Zeus, Maggie Smith is Thetis, and Claire Bloom, Ursala Andress, Flora Robson, and Burgess Meredith play memorable roles as well. Harry Hamlin as Perseus and Judi Bowker as his love-interest Andromeda are lackluster(although Ms. Bowker is VERY easy on the eyes). But their lack of acting savvy is one of the few detriments of the film. This film is fast-paced adventure that is magical, mystical, and memorable!