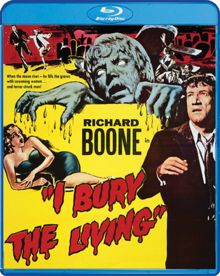 So many people call this movie a modern classic and one of the scariest genre movies ever made. Why? I have seen it more than once and done some research on it and I question all those assertions. Okay, follow me on this, Richard Boone takes the job as caretaker of a cemetery because it is a family tradition. By accident he discovers that if he places a black pin into the map showing the empty plots, the owner of that plot dies. Several friends and business associates actually do turn up dead when Richard sticks black pins into the spots marking graves reserved for them. It then dawns on him that if he can kills people by sticking black pins into the map maybe he can bring them back by substituting white pins. Now this is where we get to the really scary scenes. Boone goes running through the cemetery and sees that all the recent graves have been opened and the bodies are gone. His plan worked! But is it too late?

WARNING WARNING! I am not about to reveal the real ending of the movie, just the way it was originally written in the script. I am not, repeat NOT, telling you how the real movie ends.

As written Boone was to have locked himself in the caretakers shed which was suddenly surrounded by the walking corpses of all the people he had killed by sticking black pins into their grave markers. They do not attack but stand patiently outside calling for him to join them. Richard’s grief is so great at having caused their deaths that he dies of a heart attack. Yeah but that ISN’T the way it ended. A “logical” explanation is tacked on that totally ruins the supernatural theme that we have spent the whole movie getting used to. I for one felt let down by this and THAT is why I say this movie is no classic. Yes it has some well staged moments but the copout ending spoils everything. If they had just stuck to the original ending it could have pre-dated NIGHT OF THE LIVING DEAD by 10 years.