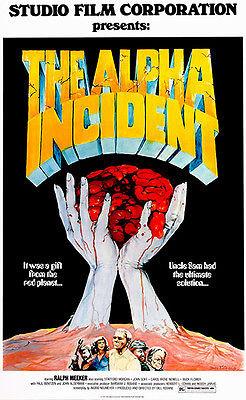 A virus from space is released accidentally while in transit on a train. It results in a group of people in a remote train depot being subject to quarantine and left isolated, while the scientists try to work on a cure.

The Alpha Incident is a paranoid sci-fi film in the same vein as The Andromeda Strain, with elements of George A Romero’s Night of the Living Dead and The Crazies thrown in for good measure. It isn’t a patch on either of those films although it’s fairly decent, all things considered. It’s admittedly quite badly paced, however, with a little too much talk to pad things out. Still, the set-up is good enough and the overall cynical 70’s sci-fi vibe works for me. There’s only one occasion when we see the effects of the virus on a human and it’s actually surprisingly decent – they could really have done with using this a little more. The effect is basically the brain expanding and breaking out of the cranium of the unfortunate victim. This is the horrible death that the infected people are trying to avoid. For some reason this nasty scenario only kicks in when the victims fall asleep, so for most of the film the story seems to be about people trying to stay awake – a symptom that I’m sure some viewers of this movie will experience too funnily enough.

But, for me, this isn’t a bad effort overall. It’s definitely one of director Bill Rebane’s best. He operated in the Z-Grade side of the cinematic spectrum for sure but his films have an honest earnestness that is easy to get behind. And this is a relatively thoughtful narrative for Bill’s standards. However, its cheap limitations are never truly averted, and it doesn’t develop the space virus thread of the story as well as you hope and the film ends up being essentially about people in a room popping amphetamines. But, you know what, I kind of like this one anyway.