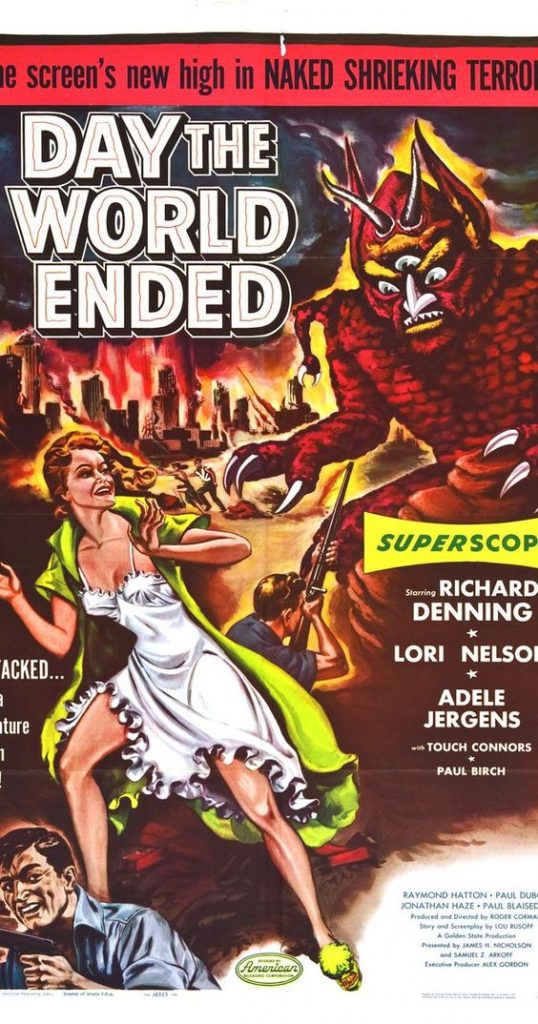 The Day The World Ended was released by American Releasing Corporation, which soon would be known as American International Pictures. AIP became one of the most interesting film-making and releasing companies of all time, and The Day The World Ended is one of AIP’s best horror/sci-fi efforts from the 1950’s. The movie was also director Roger Corman’s first effort in science fiction. This movie horrified me as a child with its nuclear doom, and its three-eyed monster with horns and pointed ears. As an adult I find I am still very fond of this movie. Upon my recent screening I have realized what an exceptional acting job Lori Nelson does as she plays Louise. Her facial expressions are perfect as she plays the different emotions her character goes through. Paul Birch plays her father, Jim Maddison. He’s a man who is most gloomy over the aftermath of the (offscreen) nuclear war, and under the pressure of running his household with the uninvited survivors who show up. Richard Denning plays Rick, one of the survivors of the atomic bombings who shows up carrying a man named Radek (Paul Dubov.) Rick soon becomes involved with Louise, while Radek, contaminated with nuclear poisoning is not only beginning to lose his mind but his body is becoming mutated as well. Mike Connors (billed here as Touch Connors) and Adele Jergens also show up at the house in the valley which escaped the nuclear doom. They play Tony and Ruby; a couple who certainly have their problems. Tony is a bickering thug, and Ruby is a striptease dancer who’s too good to be bad and too bad to be good. The problems increase for the couple when Tony seems to have Louise on his mind constantly. Also retreating to the house is an old timer named Pete (well played by Raymond Hatton) with his burro. The movie then shows the interactions, problems and emotions of the characters as they try to survive in the limited space of their post-atomic world. There is also discovered a mutation from the radioactive war lurking closer and closer to the house as time goes by. The Day The World Ended is a low-budget movie, and uses that low-budget to accomplish some good results. The only indoor setting is the house, which seems claustrophobic with the survivors. The limited, radioactive-free area of the outside world is atmospheric; especially the pond where Louise gets spooked while swimming with Ruby, and the night woods. The hills surrounding the house are covered with a radioactive haze, which adds nicely to the atmosphere and feeling of claustrophobia. The sci-fi music is creepy, and the beginning credits roll in a fashion that adds a nice touch. Ruby seems to have her own theme with the grind-instrumental record she plays while passing time in the house. There’s a hint of ESP in the movie as the three-eyed mutant (possibly Louise’s fiance’, who was believed to have been killed when the atomic bombs exploded) seems to be making contact with Louise. Louise claims the mutant talks to her at times. The mutant (created and played by monster-maker Paul Blaisdell) often disappoints viewers. I still find the mutant to be sheer ugliness although I no longer cover my eyes as I did when I was a child (LOL.) The Day The World Ended is a fine and interesting low-budget movie with a serious, but somewhat unrealistic approach to nuclear horrors. I still find this to be a gem of a movie.