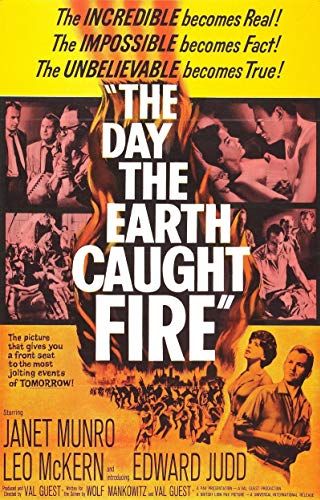 After the explosion of nuclear bombs by the United States and the Soviet Unions, the weather in London and in the rest of the world changes. The Daily Express alcoholic reporter Peter Stenning (Edward Judd) meets the telephonist Jeannie Craig (Janet Munro), they fall in love with each other and have a love affair. When Jeannie overhears a conversation, they learn that the explosions have altered by 11 degrees the Earth nutation, changing its orbit. Now the only chance to mankind is to explode bombs again so that the rotation shaft returns to its position. Will Earth be saved or doomed?

“The Day the Earth Caught Fire” is a disaster movie with an interesting storyline and an ambiguous conclusion. Peter Stenning is a non-likable character and his behavior betraying his girlfriend is the weakest part of the story. The conclusion with the newspaper showing two front pages written “World Saved” and “World Doomed” is fantastic.