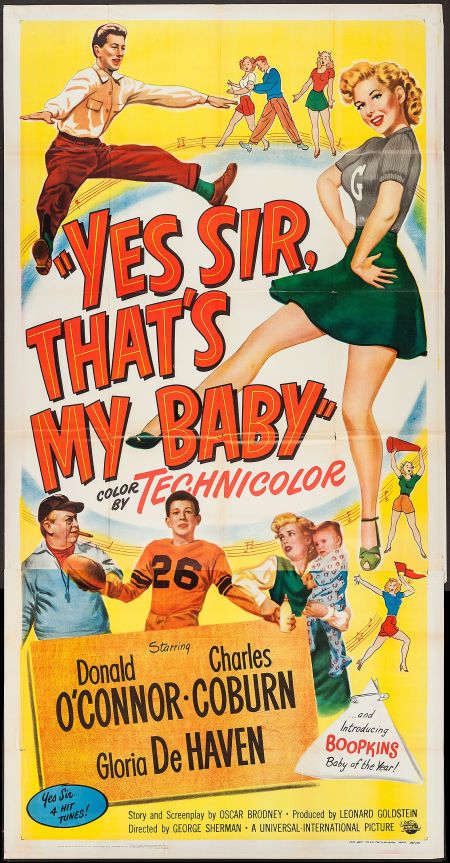 It was 1949, and with the post-war baby boom underway, babies occasionally were the focus of the melodrama in musical comedies. This Universal low budget Technicolor film is a prime example. Fox’s “My Blue Heaven”, starring Betty Grable and Dan Dailey, released the following year, was another. The story is pretty goofy and predictable, and sometimes slow paced, with a couple of songs by stars Donald O’Connor or Gloria DeHaven, and one memorable song and dance by Don. In part, it’s one of those sports films where the sport hero(Don in this case) is prevented from playing most of a key game, and is finally released onto the field to engineer a ‘miracle’ comeback win. Quite predictable. However, this segment is interrupted by a hilarious baby problem on the sidelines, that almost snuffs the comeback win. In part, this is a ‘battle of the sexes’ drama/comedy film, focusing on the conflict between the desire of college student fathers to play on the football team vs. their responsibilities in providing for their family and helping care for their baby. Hence, two of the featured songs are titled “They’ve Never Figured Out a Woman”(O’Connor), and “Men are Little Children”(Gloria). This last ditty was inspired by Don’s insistence that the school football team needs him, and by his clumsiness and lack of enthusiasm regarding domestic and baby care activities. The title song, done as a group sing along in the finale, is the only non-original tune, having been a standard since the ‘roaring’ ’20s, with Eddie Cantor most identified with it. Of course, the ‘baby’ in the minds of the composers was no infant! Walter Scharf and Jack Brooks composed the other songs.Director George Sherman had specialized in low budget B films, mostly westerns, for several studios. Glossy musicals weren’t exactly Universal’s forte!

Don does one impressive elaborate solo tapdance routine, in a Laundromat setting, which looks like a warm up for his future roles in bigger budget films at MGM and Fox, including “Singing in the Rain”, “I Love Melvin”, “Call Me Madam”, and “There’s No Business Like Show Business”. Like contemporaries Judy Garland and Martha Raye, for example, Don was born into a vaudeville family and began performing on stage at an early age. Paramount used him as a child actor.Universal then signed him for a series of low budget teen-oriented musical comedies, mostly costaring Peggy Ryan as a dancer and Gloria Jean as songstress.He remained with Universal, mostly doing straight comedies, with the occasional musical comedy. His ‘Frances the talking mule’ series were popular and profitable, if a waste of his musical talent, which later was mostly utilized by other studios.

Gloria DeHaven, the same age as Don, was also the offspring of a theatrical family, and was signed at an early age by MGM, where she mostly was relegated to second tier musicals and other films. In the mid ’40s, she had 2 children and did little film work. Now, she was returning to the occasional role in musicals, but wold not go on to become a big star. She had a good singing voice(I occasionally play one of her CDs) and passable dancing and acting talent.

Gruff Charles Colburn plays the combo football coach and biology teacher at this small college. His feud with one time romantic partner Professor Sophia Boland(Barbara Brown) provides additional fuel for the ‘battle of the sexes’ theme. Don’s ‘Mr. Fix-it’ attempt to get these two old confirmed singles back together predictably ends in disaster. Anyone who has seen a good sampling of late ’30s through ’50s films will instantly recognize the charismatic Coburn, who usually played some sort of fatherly authority figure.