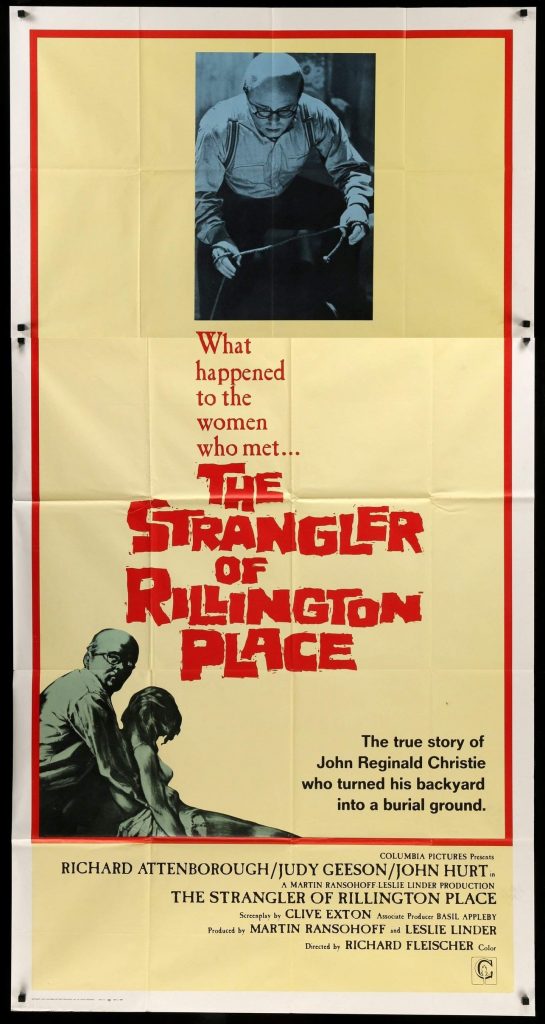 10 Rillington Place is more than a classic film. It is frequently referred to whenever the call for the death penalty is made in Britain. The notorious miscarriage of justice i.e the hanging of Timothy Evans, an immature half-wit, for the murder of his wife and child when it is almost universally accepted that they perished at the hands of John “Reg” Christie, is one which will always haunt the British legal system. When Christie was found guilty and hanged as a serial killer of women, the body of Evans was exhumed and reburied in consecrated ground but this did nothing to hide the embarrassment of those who supported the death penalty.

The film itself is a dark and brooding masterpiece which depicts life in post-war London perfectly. The grim, dirty, rain-washed Rillington Place in Notting Hill was a seedy side-street which housed the poor but largely respectable families which had survived the blitz. John Christie had moved down from the North to find work in the capital but ill-health and a penchant for petty crime prevented him from being successful.

Richard Attenborough plays the downtrodden but curiously arrogant Christie to perfection. His voice almost a whisper as he lauds it over London’s underclasses. In fact Christie was not a landlord, as many believe, he was merely a tenant who fancied himself to be a landlord and acted accordingly. He also dreamed of being a doctor, with devastating consequences. His treatment of the poor, subnormal Evans (John Hurt) and his beautiful but foolish young wife, Beryl, (Judy Geeson) was centred around their desire for an abortion – illegal in the UK until the late 1960s.

John Hurt is very good as the hapless Evans although his Welsh accent needed refining. His look of wide eyed horror and disbelief is a sight to behold. Geeson pouts and whinges and looks gorgeous: the kind of wife any man would desire and yet the kind destined to irritate intensely.

The key to appreciating 10 Rillington Place is to have some idea of its setting in British history. To wander in clueless will result in disappointment. There is no gore or x-rated content of any kind and its slow pace will infuriate many. Yet, as a snapshot of an England now gone and a reminder of the folly of capital punishment it is a timeless classic worthy of many viewings.