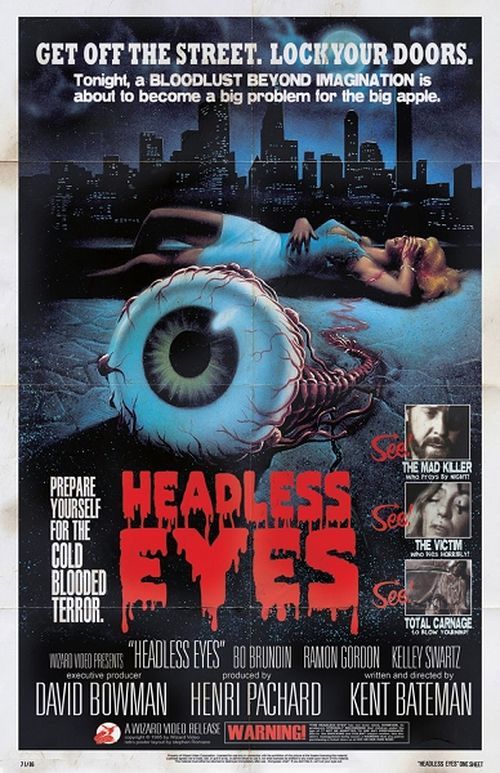 Arthur (Bo Brundin) is a struggling artist who is desperate for rent money so he breaks into a woman’s home to try and get some quick cash. What he gets instead is her shoving a spoon through his eye. Now with one eye, Arthur turns into a serial killer who goes around murdering women and, you guessed it, cuts their eyes out.

THE HEADLESS EYES comes from writer-director Kent Bateman who is probably best remembered for being the father of Jason and Justine Bateman. This film got a somewhat big cult following back in the VHS days but in all honesty there’s really not much here to enjoy. If you enjoy extremely low-budget and bad movies from the drive-in era then you might want to check this out but be ready to be bored out of your mind.

The film’s biggest problem is that it seems there wasn’t a real filmmaker behind the camera. I’m not sure what Bateman’s story was but it seems as if he was just trying to make some cash by making a violent horror movie. Sadly the entire thing is very poorly directed and the pacing is just downright awful. The film clocks in at just 78-minutes but it really feels as if it’s twice as long. The characters are all extremely boring. Not for a second are you interested in anything going on. Not to mention that the blood effects aren’t all that impressive.