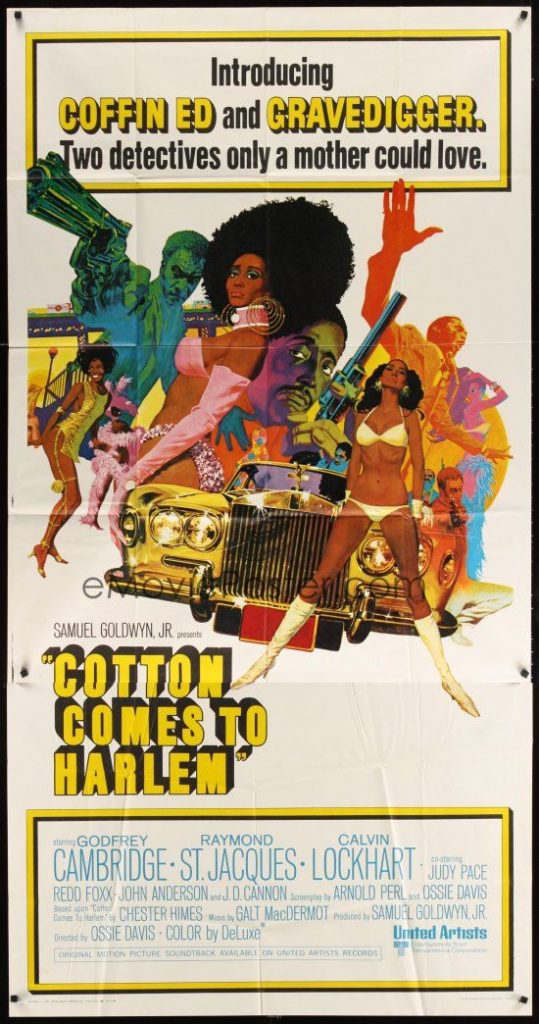 COTTON COMES TO HARLEM is the adaptation of Chester Himes’ 1965 novel of the same title and stars Godfrey Cambridge and Raymond St. Jacques as his two Harlem police detectives “Gravedigger” Jones and “Coffin” Ed Johnson respectively. Their motto: “[We] may have broke some heads, but we ain’t never broke no promise.” Jones and Johnson are on the trail of “Reverend” Deke O’Malley (Calvin Lockhart. O’Malley is funding a “Back to Africa” cruise by taking donations from the good people of the ‘hood. However, before he can make his getaway, a robbery breaks out and the money, hidden in a bale of cotton, gets lost in Harlem. This sends the cops, O’Malley and the robbers on a wild search through the New York area for the stolen loot. Redd Foxx appears as a junk dealer (two years before SANFORD AND SON) who holds the key to the fate of the money.

Oddly enough, the movie is less rough then Himes’ novel (which had quite a bit of rough language and sex in it), yet received an R rating back then. It would hardly register as a PG-13 today. COTTON COMES TO HARLEM should be seen to see the true origins of the genre known as “blaxploitation” (black exploitation movies).

COTTON is quite an enjoyable action romp. It is especially light compared to the later “blaxploitation” films that followed it.