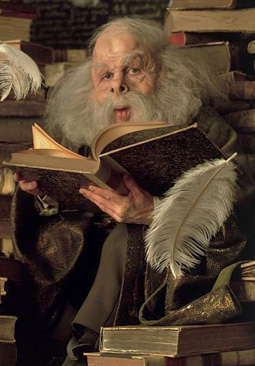 So—Harry Potter mania is upon us again. In Harry Potter and the Deathly Hallows: Part II, a pantheon of English actors take their final bows as characters in J.K. Rowling’s wizarding world. This seems a fitting time to salute one British thespian who puts a distinctive twist on the old saw that there are no small parts, just small actors. Warwick Davis may stand a mere 3 ½ feet tall, but he’s no small actor in my book. He’s probably unique among the Harry Potter cast in that he plays, with aplomb, two very different roles: the plucky Professor Flitwick (definitely one of the good guys) and the conniving goblin Griphook (indisputably one of the bad).

I interviewed Warwick Davis while working on Ron Howard: From Mayberry to the Moon . . . and Beyond. We spoke by phone, and I couldn’t help being surprised by his rich baritone voice. But he was hardly a baritone when he got his first role. Purely by chance, his grandmother heard a commercial seeking people under four feet tall to play the furry Ewoks in Return of the Jedi. Warwick was eleven years old, and stood a mere three feet eleven. George Lucas cast him on the spot, then quickly noticed that the tiniest Ewok was imbuing his role with some character. Unexpectedly, his time in drama class was paying off. Warwick explained to me, “Because I was a very outgoing and social sort of child, my mum felt that quite a good way of channeling all this energy was to send me to a drama group. It really wasn’t because she felt I would have a career in acting. It was just something for me to do on a Saturday morning.”

Another stroke of luck: the actor set to play a scene with Princess Leia contracted food poisoning. Young Warwick took over, and earned the character name of Wicket the Ewok. Some years later, Lucas hired rising director Ron Howard to helm a sword-and-sorcery epic, Willow, and Warwick nabbed the title role. Aside from the challenge of starring in an action film, he was faced with the fact that, at seventeen, “I was going to be playing the father of two children, a man of the world. And of course I’d never even lifted a baby, let alone had the experience of being a father at that point.” Ron Howard (whose own wife Cheryl was about to give birth to their fourth child) prepared Warwick to interact—as the plot required—with a full-sized baby by scheduling two weeks in which “they had the mothers bringing these children in. I would just rehearse holding them and carrying them and feeding them and changing their diapers.” By the end of the shoot he felt ready for fatherhood, though it took several decades to get that joyful opportunity.

Since then, Warwick has played the creepy title character in the Leprechaun films, a wacky android in A Hitchhiker’s Guide to the Galaxy, and the treacherous Black Dwarf in The Chronicles of Narnia. For most roles, he’s resigned to spending long hours in the makeup chair. He’s not bothered that he rarely gets to portray a regular guy in a regular situation: “I’m an actor, and creating characters is what I do, and often these strange creatures are actually more challenging and interesting to create as an actor.” Still, Ricky Gervais has written him a new sitcom, Life’s Too Short, in which he’ll be able to play—for a change—a version of himself.