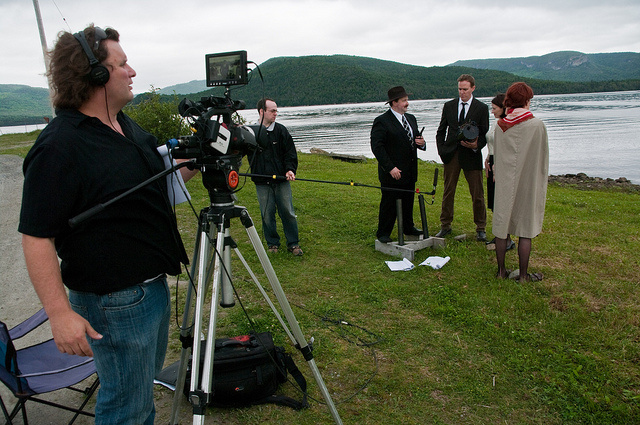 CORNER BROOK There is much mystery surrounding the local comic horror film “The Tentacle’s Claw,” but there is no mystique in the hype leading up to and including Friday’s premiere screening.
The husband and wife duo of Michael Rigler, writer/director, and Tara Manuel, producer/star, combined with a local volunteer cast in Corner Brook to shoot the film in the summer of 2010. The filming was a tedious endeavour of working around the cast’s busy lives, Manuel said, only transcended by Rigler’s many late nights of editing over 18 months.
In recent weeks and months, with the creature-feature finally created, the tentacle’s claw has been making appearances throughout the city and finding its way on YouTube and various other promotional skits. Approximately half a dozen trailers have been created to hype the homegrown B-movie, with a mill worker and an artist including those falling victim to the mysterious creature.
Manuel, who acknowledged all the hard work and effort that has gone into the film to date, is still a little uncertain as to why they have gone back to the film room at such a length to promote the film.
“I am still asking myself that,” she said. “When I have a definitive answer, I am going to call the Western Star and make a statement.”
On a more serious note, the local actress said the advertising of the film is geurrilla marketing at its finest. Social media has been a valuable asset in creating more awareness and the mainstream media has also given it its due, said Manuel. The pre-show at Friday evening’s screening at the Corner Brook Arts and Culture Centre begins shortly after 7 p.m. with the arrival of the film’s young stars in a limousine. They will be greeted by eight giant tentacled dancing girls and escorted down the red carpet to the arts and culture centre where the paparazzi await.
“This is a real Corner Brook premiere and milestone in a creative community,” Manuel said. “A lot of people helped us do this. There is a whole lot of information about this production out there right now. I know it maybe seems frivolous to some, but everybody needs to sit back and have a really good chuckle.”
The pre-show will be followed be the premiere screening of the film.