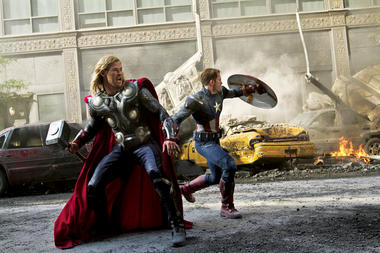 After last year’s worst-since-1995 box office sales for the movie industry, the record-setting opening weekend for “The Avengers” – $207.4 million at domestic theaters – was welcome news. The opening that outpaced the finale of “Harry Potter” followed an earlier overseas release that had been met with thundering approval.

“The Avengers” promises to be a huge plus for Disney, hit hard by the disappointment of “John Carter,” the all-star extravaganza that failed to connect with audiences in March. But it’s not yet clear whether the global appeal of “The Avengers,” which made $441 million overseas in its first week, will pave the way for more good-versus-evil hits that transcend cultural and language barriers.

“[I]n an era of globalization, international markets are more important than ever,” says Peter Lehman, director of the Center for Film, Media and Popular Culture at Arizona State University. “But … many Hollywood action films will open overseas and not be blockbusters or even big hits” in the United States, he says. Other analysts say the overseas success of “The Avengers” points to the cultural earmarks of our times.

“‘The Avengers’ is doing huge box office [numbers] because it operates as myth,” says Ben Agger, a sociologist at the University of Texas at Arlington. “A heterogeneous group of superheroes saves the world from an alien Other. We want someone larger than life to make us safe.”

” ‘Avengers’ is sort of a second-generation 9/11 movie. The aliens attack, but it is … a rich capitalist, a Norse god, a Russian spy, an American black ops assassin, a lost scientist, and a World War II-era hero who defend New York … not the US government,” he says.

“[T]his is giving a huge boost to the summer season,” says Paul Dergarabedian, head box office analyst for Hollywood.com. Rattling off a string of potential blockbusters that include “Dark Shadows,” “Battleship,” “Men in Black 3,” and “The Amazing Spider-Man,” he says, “this alignment is as rare as a 100-year flood.”