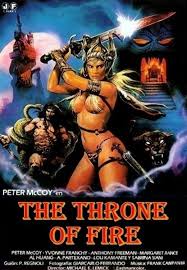 Peter McCoy (Pietro Torrisi) who also starred in the similarly themed Sword Of The Barbarians and The Invincible Barbarian appears here in this tale of swords, sorcery and ominous prognostication.

In it he plays Siegfried, a mightily muscled hero who is predestined to challenge Satan from attaining mastery over the earth, a feat that the dark one can (luckily for us) only achieve during a solar eclipse and whilst sitting on the magical ‘Throne Of Fire’ of the films title.

OK so the film isn’t going to win any awards for ingenious plot intricacies but in this genre what can one expect?

As it is, the film is actually mildly enjoyable and even has a few decent scenes on offer (the ‘Well Of Madness’ being a particular stand out), plus there’s some rather energetic sword fights on display from our oiled down hero (who looks a fair bit like fellow B movie action star Jeff Wincott!)

Always a plus in my book, this also stars regular Italian sword and sorcery sex symbol, Sabrina Siani who as usual looks absolutely gorgeous!!!

On the downside however, the movie does tend to drag a fair bit throughout, especially during the scenes when our hero is captured….in fact our hero seems to spend the entire film alternating between getting captured and then staging daring escapes! Oh well…..