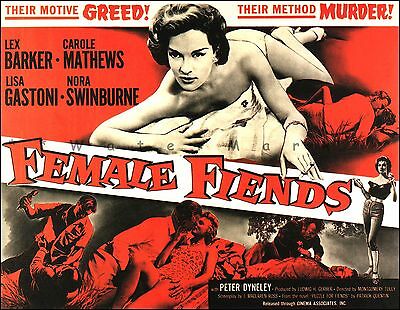 This film stars Lex Barker, who in 1949 became Tarzan in succession to Johnny Weissmuller and made a succession of Tarzan films. He was very tall, handsome, and impressive, and was in constant demand as a leading man in B films (he appeared in 81 films). He died at the age of only 54 of a heart attack in the street in Manhattan. He does very well in the lead role in this film, though the acting laurels go to Lisa Gastoni as ‘Marny’. I have recently praised her as an underrated actress in my review of WRONG NUMBER (1959, see my review). Carole Mathews and Nora Swinburne do very well in their creepy roles also. As someone who likes amnesia films and tries to see all of them, I was disappointed that this one was so corny. Lex Barker lives between Nice and Cannes. He is attacked and knocked unconscious by a thief whom he picked up as a hitchhiker, and he suffers total amnesia. This is made worse by the fact that he has no identification on him as a result of the robbery. A doctor at the hospital says he knows who he is, and he takes him to a huge villa for private nursing. But this is all a scam, for Barker’s amnesia is convenient in enabling the household of women there, together with the dishonest doctor, to persuade him that he is the head of their family. The motive is to pretend that he is that person in order to complete the process of inheriting a large amount of money and property. Then they would get rid of him. Barker slowly begins to realize that something is wrong, and the plot thickens. It is a pity that the film is not at all convincing, and is just a run of the mill low budget ‘product’ directed without a trace of inspiration by Montgomery Tully, who did a much better job the year before in directing THE HYPNOTIST (1957, see my review). In the 1950s, Tully was directing as many as ten films a year! No wonder they were not all good, as he had become a mere factory hand. He must have sleepwalked through THE STRANGE AWAKENING, without himself waking up. And I bet he had total amnesia for half the films he had made the year before. We can perhaps be forgiven for not knowing much about most of them.