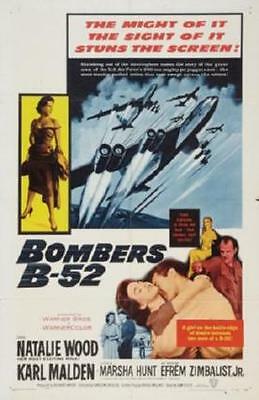 I am NOT being negative when I say that “Bombers B-52” is a propaganda piece. Not all propaganda is necessarily evil and the film clearly is a giant recruiting film for the US Air Force. It features their new B-52 bomber and is intended as a publicity piece. However, he’s the odd part…the film is also, at times, a bit like a soap opera. While the general plot is a lot like the superior “Strategic Air Command” where a man struggles to decide whether to stay on active duty or move to the private sector, there is the soapy element because the man with this struggle (Karl Malden) is under the impression that his Commanding Officer (Efram Zimbalest) is a playboy trying to wood Malden’s daughter (Natalie Wood). Of course, it’s all just a misunderstanding that could EASILY be explained away, but most of the film Malden and Zimbalest grunt and do their macho posturing instead of just talking. This makes an otherwise decent film a bit clichéd. During a few sequences, you really wish they’d have edited out the schmaltz and theatrics! It’s a shame, as the air sequences are very nice (with a few amazing aerial shots of the bomber from above in mid-flight) and the film is a decent historical look into the Cold War.

A few things to note in the film: The interesting ejection sequence–it really opened my eyes about the way a crew would leave the plane if there was an emergency as well as the low flyover in Egypt–which surely would have resulted in the Egyptians shooting at the plane as well as an international incident!