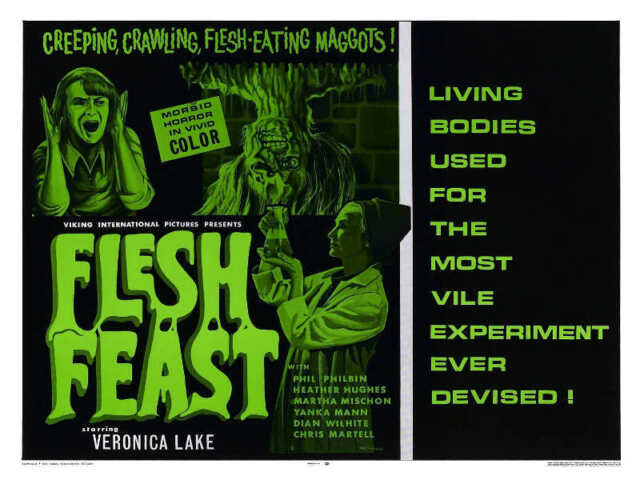 In the 1940s, Veronica Lake made a meteoric rise to film stardom, thanks to her sultry beauty and, her highly exploited “peekaboo” hairstyle. She starred opposite big names like Alan Ladd and Fredric March, scoring screen successes in films like “This Gun For Hire” and “I Married A Witch”. She held her own with female stars as well, and she surprised even her detractors with her performance as a bitter navy nurse in “So Proudly We Hail”. But changing times and her own failings caught up with her, and by the end of the decade, her heyday was over. With two unsuccessful marriages behind her (and two more in her future) Veronica headed for New York City, where she made occasional television and summer stock appearances before dropping completely out of sight. It was briefly big news when she was found working as a barmaid in a second rate hotel in the early sixties. But by now, her longtime alcoholism and years of hard living had robbed her of her looks. Without them, public interest in her soon faded again. She did return to the stage in assorted vehicles, but her success was minimal. Eventually, she relocated to Miami, Florida, where she lived in relative obscurity. In 1966 she went to Canada for a part in an obscure movie called “Footsteps In The Snow” which had no U.S. release. The following year, she was discovered by some industrial filmmakers who had long wanted to produce a commercial feature. They approached her to star in their film “Time Is Terror” and convinced her to invest in the project. As one author put it, “If ever a movie queen suffered a terminal comedown, this was it”. Surrounded by amateur performers and pathetic production values, she failed even to rise to a minimal level in this Miami, Florida shot quickie. Looking utterly ordinary in long shots, and luridly aged in close-ups, poor Veronica didn’t act so much as walk through her part. As a deranged doctor, who has hit upon a successful youth restoration formula, using flesh-eating maggots!, she looks both bored and confused, her best moment coming when she is forced to ad-lib while she struggles desperately to don a pair of rubber gloves. The supporting cast is no help at all,merely advancing the plot by talking it to death, (when they aren’t wandering aimlessly around the set, that is). Director Brad Grinter apparently only required the actors to move while the camera was pointed at them,so the fault isn’t entirely theirs. As for the ”twist ending” involving an attempt to put a supposedly long dead Dictator back in power- forget it. Just like the script does. There is, admittedly, one unintentionally hilarious scene involving a Private Detective/Nurse and a corpse in a wheelchair that predates ”Weekend At Bernie’s” by almost 20 years.)But there’s a whole lot of nothing before you get there. According to Veronica herself, the film was shelved for three years because no master shots were filmed. Then, in 1970, the opportunistic production company scraped it together, changed the title to “Flesh Feast”, and released it to cash in on Lake’s just published biography. Because former leading ladies such as Bette Davis, Joan Crawford and Olivia De Havilland had unexpectedly revived their careers in horror movies, this travesty was promoted as Veronica’s “comeback film”. This was a strange course of action for the filmmakers to pursue, though, because it’s unlikely that the audience for a horror movie of THIS quality either knew (or cared) who Veronica Lake was. As expected, it did nothing for her career, and she died in poverty, three years later. A previous reviewer cites a scene in which the female detective working undercover as a nurse in the doctor’s laboratory (overseeing the theft of bodies from a nearby morgue) enlists the help of a multi-talented chauffeur to cut up the body parts. “Poor Mrs. Lustig,” she sighs, “I hope she doesn’t mind leaving her body to science.” “Try not to think about it,” advises the chauffeur, sawing away. “I guess you are right, Hans.” concludes the detective/nurse, “What is done is done.” Alas, the unintentional humor is the only remotely entertaining part of this tripe. What a sad end to the career of a still fondly remembered star.