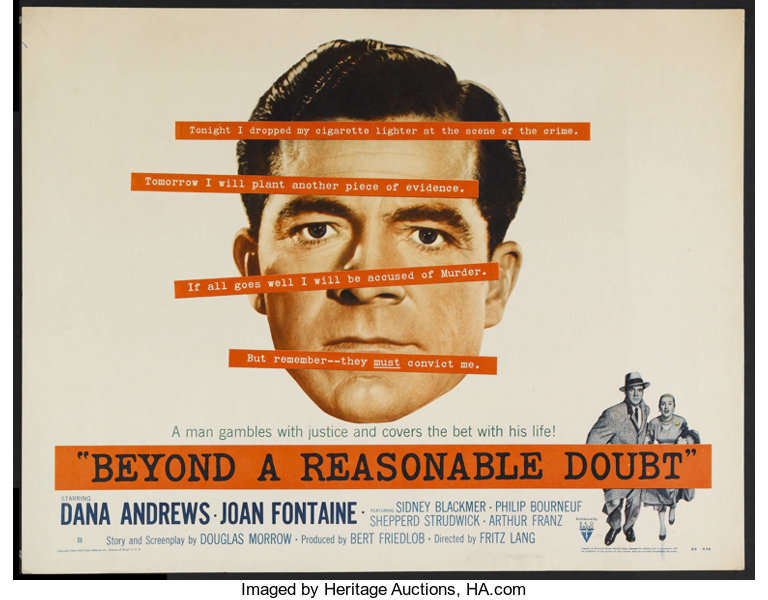 In his last film in the USA before returning to Germany where he had left to escape the Nazis in the Thirties, Fritz Lang takes up the case of capital punishment and its application, especially when the case is a circumstantial one.

Unlike the remake of Beyond A Reasonable Doubt with Jesse Metcalfe as the reporter and Michael Douglas as a corrupt District Attorney, both Sidney Blackmer as a newspaper publisher and Sheppard Strudwick as the politically ambitious DA hold each other in respect. Blackmer is not happy with Strudwick running up a string of murder convictions as a platform to be governor.

He and prospective son-in-law Dana Andrews agree to frame Andrews with a string of manufactured evidence all carefully documented with photographs to have the police arrest him for murder of a burlesque queen that the police are stumped about. It certainly works all right, but as the case is coming to verdict, Blackmer is killed in an automobile accident and the evidence burn with him. Andrews is left in quite the jackpot.

How it all works out is for you to see. Andrews is not abandoned by fiancé Joan Fontaine who is Blackmer’s daughter. She does what she can and toward the end of the film her performance dominates.

Fritz Lang certainly builds the tension worthy of Alfred Hitchcock himself. One scene did have me baffled. After the police have gotten those arranged clues, Andrews makes some moves on burlesque dancer Barbara Nichols who resists his advances. I could not quite believe that one at all.