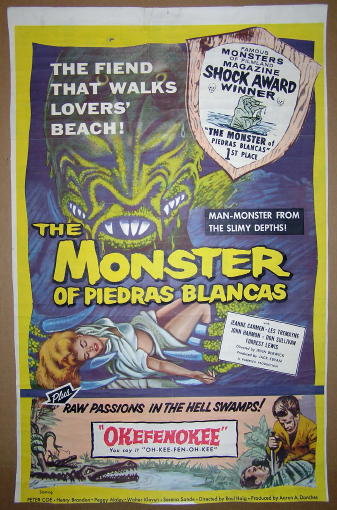 A generally underrated monster flick from 1959, The Monster of Piedras Blancas is often compared to the undeniably similar Creature From the Black Lagoon, with this film invariably coming out second best. Certainly, Creature From the Black Lagoon is a true classic and The Monster of Piedras Blancas rarely equals its more famous cousin, but nonetheless this is a very good little film with a lot going for it on its own terms. The Monster, of course, is the star of the show, and the suit designed for him is impressive and scary, and must have seemed even more so in the 50s. As is typical of this sort of film, screen shots of the Monster are limited up until the climax, when he runs wild in all his visceral glory. The Monster’s killings are quite brutal and rather bloody for the conservative 50s, and there are several decapitations in his wake. The coastal setting, where folk tales of the alleged Monster are whispered in the shadows, is evocative and the director uses the location to maximum effect. Acting is for the most part competent if unexceptional, highlighted by the dazzling Jeanne Carmen as the lovely Lucy, upon whom the Monster inevitably turns a ravenous gaze. Ms. Carmen is a luscious damsel in distress, and it’s a shame she didn’t do more sci-fi. Don Sullivan plays Lucy’s boyfriend, Fred, and veteran b-movie actor Les Tremayne is a local doctor. John Harmon turns in a surprisingly effective performance as Lucy’s father Sturges, the local lighthouse keeper, a man with many secrets and who knows more about the Monster than anyone suspects. The townsfolk of Piedras Blancas are developed with some attention to detail, and it means something when one of them dies. The only real weaknesses of the film are its obvious low budget and a somewhat lagging pace that does make the movie feel a bit longer than its short run time of 71 minutes. But overall, this is a pretty good monster movie that meets most of the genre requirements. Unfortunately, this is a difficult movie to find, but if you can track it down, the Monster From Piedras Blancas is a surprisingly effective chiller.