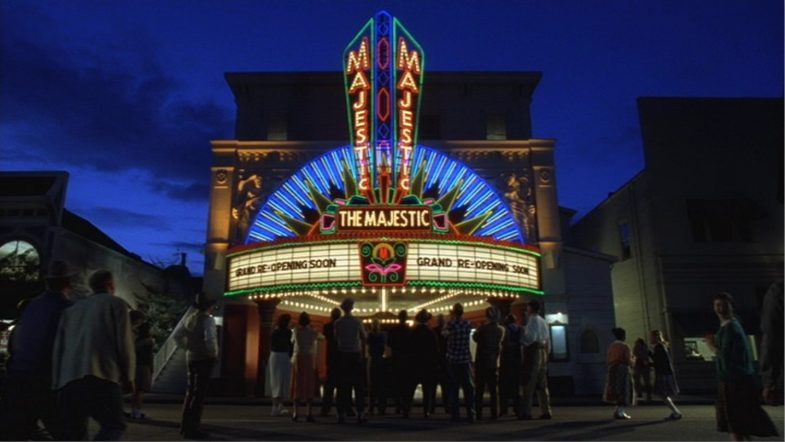 I love visiting the smaller city centers across America. Every town is different and diverse. The downtown core usually spins a tale of a spectacular vibrant rise, then a sad decline. I am always on the lookout for a movie theater or at least the remnants of a theater. The singular commonality in any small downtown core which remains vital is one thing, the presence of an operating movie theater. If the theater is intact and operating then the city center is vital.

The health of movie theaters is tied directly to the health of downtown cores. Movie theaters play a keenly important role and provide a much-needed entertainment aspect to a downtown core, often serving as massive anchors in many smaller and medium-sized communities. Movie theaters traditionally hold to longer operating hours and the singular ability to win an audience that is socioeconomically and ethnically diverse. The traffic flow that theaters provide is more than significant but more importantly to promote within their patrons a deep psychological stake in the downtown core. Theaters turn downtown from an abstract to a downtown that is emotionally owned by consumers. Any city council with its salt will grasp this and ensure the sustained stability of its theaters. It is the best investment any civic government can make.

In the mid-1940s, 60% of Americans went to the movies every week. That number fell significantly when television came on the scene and began to become fixtures in American homes. This led to a wave of closures of many downtown theaters. On a national basis movie attendance began to rise in the 1980s and 90s due to the increasing population and the interest in movie-going brought on by the introduction of VHS rental stores. This growth continued until 2003 when movie attendance began to fall. Since then the market has seen a decrease of close to 19%.

In addition, domestic movie theaters rentals only account for a small portion of the movie studios’ domestic revenues: about 31% of the domestic revenue. Most of their domestic revenues come from pay for view TV, online movie streaming, electronic games, amusement parks, franchises, and licenses, etc. In recent years, DVD sales have nose-dived to almost becoming non-existent while increased revenues from movie downloads and streaming have not filled the gap. Streaming services have accumulated giant war chests and the market of streaming is proving itself to be a more than an expensive proposition. The days of having a proper 90 day plus the theatrical window were much more profitable for the studios.

The rise of the giant comic book driven movie has stifled and artistically shifted the market. Many moviegoers have come to the realization that Hollywood no longer produces a product which speaks to them. The digital transition should have created a liberation of diversity and experimentation with content, theaters were hamstrung as a result of the draconian rules behind the VPF fees. The audience are crying out for what was. Older TV show’s like Friends are becoming a staple of the streaming services because audiences are demanding good and are voting with their remote control.

When the shift to digital occurred many small communities rallied in support of their local theaters. States like North Dakota, New York, and Maine had regional wide support organizations to raise funds to purchase equipment for theaters.

One of the most frustrating things for me is that theaters still have a huge amount of power in this market space. While the revenues being created by a theatrical release is diminished, the success or failure of a movie in the ancillary markets depends on having a proper theatrical release. In many ways, theaters are the prime form of advertising for a movie. A theatrical release gives rise to increased streaming revenue, increased foreign sales, and a more than strong aftermarket. The studios do not acknowledge this and insist on drawing every possible penny out of the pockets of the theater owners. A properly enabled industry lobby would turn the tables on the studios and begin to charge them access to the screens. When a studio charges a theater 65% box office rental and the success of that movie is predicated upon that theatrical release, one would think that the studios would either provide a revenue share in aftermarkets or offer a reasonable box office rental, a reasonable 40% seems to be fair to me.

Reducing the windows or day in date release, the studios are betraying how short-sighted they really are. If they stopped ignoring theaters’ rightful place in the movie ecosystem, they might find themselves in a much stronger position. But they do not.

The biggest risk at present to downtown core theaters are the business practices of the studios. With the dismantling of net neutrality and the proposed dismantling of the Paramount Decree, smaller theaters are about to face a new wave of challenges. The civic government in small and medium-sized downtowns, as well as mall operators, should recognize that their movie theaters and their futures are under attack from a capricious studio complex. These theaters are such important cultural assets and economic engines that the negative impacts of their closures have a high likelihood of devastating their local economies.

In order to begin to protect their local downtown economies communities should do the following;

Lobby State government to inact legislation to counter the dismantling of the Paramount Decree and see the value in supporting net neutrality.
Reflect the economic value movie theaters have in maintaining and building the downtown economy and provide tax relief as a reflection of that impact.
Promote the transition of community influenced programming, and help shift the theater away from depending on new releases
Create an increase of the cable franchise fees and direct that to underwrite community-based programming in the theater (making sure it does not impact cable rates). Maybe this will make the folks at Comcast sit up and take notice. More movie day camps and more seniors programs
Promote the establishment of region-wide and Statewide programming buying co-operatives.
Promote a wider base of local suppliers
Create programming committees to support the theater made up of businesses like restaurants who are directly impacted by the theater.
Theaters in 2020 are about to face an onslaught of pressures. The studios will continue to abuse the relationship they have with theaters and will chase easy money. Communities will have to aid theaters in their fights as they have as much to lose as the theater itself by the theaters’ demise.

It’s time to fight. Needs some ideas , go to https://www.historicartcrafttheatre.org/ write Rob Shilts better yet come and see a movie at the Historic Artcraft…..