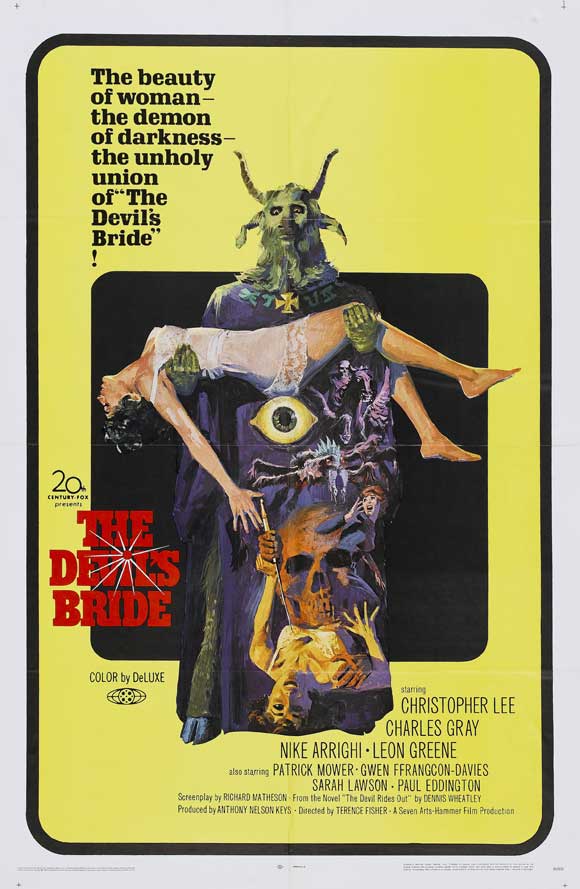 One of Terrence Fisher’s greatest directorial efforts certainly is this stylish, witty, thrilling adaptation of a Dennis Wheatley novel. Richard Matheson did the screenwriting honors, ad like most of what he touches, it turns to gold. This film has a wonderful score throughout, some superior set pieces and some pretty novel special effects for its day. But behind all of this is the central, universal battle between the forces of good and evil, represented by the characters of Christopher Lee and Charles Gray. Both actors do an excellent job. This may indeed be Christopher Lee’s finest performance, which is all the more surprising since he not only plays a good man but also is in a role that Peter Cushing would have devoured. Lee, from the very onset of the film, plays a man well-versed in knowledge of the occult and whose presence literally steals scene after scene. His counterpart, the malevolent Charles Gray, is just as good as Lee’s antithesis. Gray is an underrated actor whose presence also illuminates and transcends the screen. The film boasts some great scenes including the much heralded Angel of Death scene, and there is a great scene between Gray and Lee’s niece. A tremendous film in many respects and one of Lee’s best, Fisher’s best and Hammer’s best!