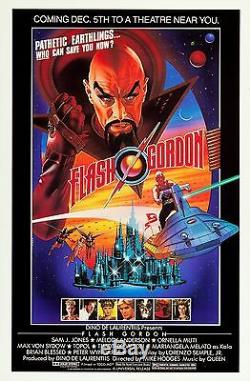 After a plane crash in extreme weather, Flash Gordon and his travelling companion Dale Arden after abducted by Dr Zarkov to help pilot his spaceship to confront what he believes is an attack from space. Once in space Flash comes faces to face with the cause of the extreme weather, Ming the Merciless and is sentenced to death. Saved from death by Ming’s lustful daughter Flash sets out to save his friends and stop Ming with the help of the leaders of the kingdoms.

Even when this was brand new I suspect it looked out dated and a throwback kind of appeal. More than 20 years later this definitely is appreciated as a laugh by about as many people who genuinely enjoy it on it’s own merits. The plot is well known to most people I suspect  I know it from the 25 minute b/w `classic’ series that BBC2 repeated in the mornings when I was only a lad in the 80’s. But it is easily nutshelled as above. The story moves alone at a good pace despite the poor effects and is actually pretty exciting.

The effects are poor  even for 1980’s the back projection is rubbish and the costumes are silly. Compare it to the advances made in Star Wars and stuff years before and it looks weak. However the vision is ambitious and it works well if you accept the weaknesses from the start. Another weakness is the acting from ranges from wooden to just plain hammy. Jones is perfect as Flash, despite being wooden as a tree. He comes over like a 30’s matinee idol type, which is just what the fun mood of the film needed. Anderson is awful but again just accept the weaknesses. Von Sydow is good as Ming and Topol is a little unhinged as Zarkov. Blessed hams it up so much you could slice him and serve him with pineapple but he also suits the film well. Dalton, O’Brien, Blue Peter’s Peter Duncan and Robbie Coltrane and several other unexpected Brits turn up which is nice.

If you’re not sure if this film is for you then watch the first 20 minutes. By that time you’ll have seen two key things that sum up the film. Firstly you’ll have sat through the extremely cool theme song from Queen. That gets me in the mood every time I hear it! Secondly you’ll see a fight with Ming the Merciless’ men where Flash takes them on in a form of American Football fighting! Both this scene and the music are a little silly and quite camp but if you like these then the rest of the film will suit you fine.