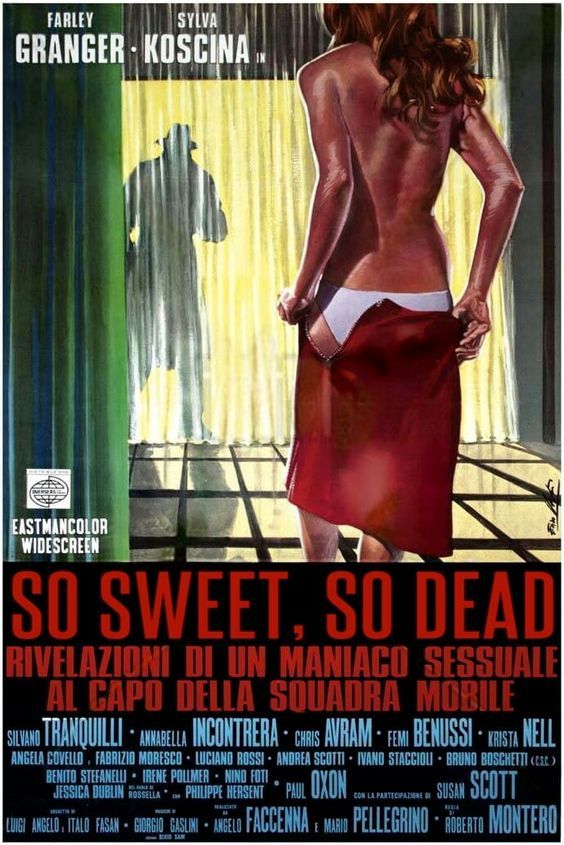 Someone is the classic giallo uniform (hat, gloves, raincoat, stocking over the face) is murdering the adulterous wives of the upper classes and leaving pictures of their crimes at the scene. Try not to focus on the men in this situation getting off without punishment – just go with the flow.

A moustachioed Farley Granger is on the case, which quickly becomes a serial killer case when another unfaithful woman is stalked, in slow motion, on a beach, then slashed to death. Farley finds pictures scattered about that crime scene too, although the offending male always has his face scored out. Who could be putting paid to the pampered people of the pompous populace?

So everyone that’s rich is knocking boots with each other, we find out as all the surviving ladies have a naked massage thing going on. Silvano Trinquili is having it off with his neighbour, whose husband is crippled, and when she’s murdered, her husband stupidly falls down a flight of stairs and dies, which may be the most pointless random death in a giallo I’ve watched to date.

Oh, and there’s the obvious red herring. Played of course by Luciano Rossi, this red herring is the guy who prepares the corpses – he loves running his hands over them and speaking to them and tells the policeman that they are at the most beautiful in this state. I think the character’s name was Reddo Herringi.

Although it is packed full of naked women, the plot kind of plods along bumping off people here and there. The ending is a cracker however – one of those out of nowhere endings you get in Italian cinema (see Black Turin for another one I didn’t see coming). This is one of those gialli that you’ll get to once you’ve watched the more interesting ones.