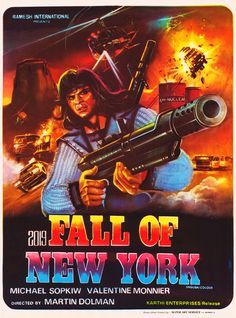 After the Fall of New York is one of the best of the seemingly endless Italian rip-offs of John Carpenter’s Escape From New York that deluged the early 80s. Mind you, I really like these films, so that is not a slam by any means. This flick is certainly one of the most entertaining of the lot. Michael Sopkiw does his best Snake Plisken imitation and is quite good. The story is original: Parcifal (Sopkiw) must journey into the hell hole to retrieve the last fertile woman alive; the key to the survival of the human race! You have all the great exploitation elements: violence, gunfire, brutality, gore… could have used more t&a, but hey, you can’t have everything. Creative characters abound like the midget (Shorty, what else!) and George Eastman as Big Ape. Anna Kanakis (wow) is great as the treacherous Eurac officer trying to stop Parcifal at all costs.