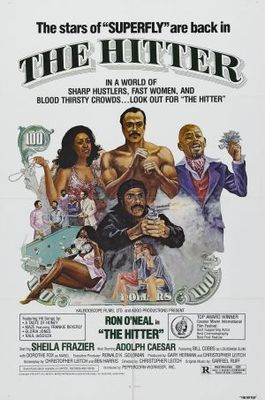 “The Hitter” is one of those 70’s era films that is so drenched in raw atmosphere and style that while watching it you can almost smell the damp, stale and smoked-filled pool halls and bars, and the cheap perfume and sweat of the run down whorehouses, and the piss and blood splattered alleys. The great Ron O’Neal, Mr. ‘Super Fly’ himself turns in an intense, low key performance as Otis, a down-on-his-luck pool hustler, working the halls for survival, when he meets up with the aging conman Nathan, ( a classic performance by Adolph Caesar), an ex-pimp who sees Otis as a last chance opportunity to cash in. The two old friends hit the road, along with Lola, the whore of a rival thug who falls hard and fast for Otis. The plan is to make money on the proceeds of bare knuckle street fighting, a style of brawling that has no rules or honor. I can’t say enough great things about this movie. It’s a fighting movie, it’s a beautifully filmed road movie, and it’s a dark and murky crime drama filled with some despicable characters, like Louisiana Slim and his cronies. But we also get some characters that we can like and relate to, so much so that when they take a beating, we can feel it. The nostalgia factor of this one is off the scale. While watching it, I was reminded of pulp authors like William Burroughs and Charles Bukowski, who wrote stories like this, filled with the kinds of people you will see here. It’s also wonderfully put together; it begins somewhat light, setting up the scene with some comic moments that let the viewer get to know and like the characters. Then the story becomes progressively darker, until it explodes in the final act when all the rage and frustration come to a head, and everyone gets what is coming to them. Even though there is no restored dvd available, the beauty of the raw, stark cinematography still shines through, and the old-school 4×3 picture framing actually adds to the vintage feel that so many modern directors try to recreate, and fail. Seek this one out, all fans of grindhouse, blaxploitation, and raw 70’s cinema; “The Hitter” stands shoulder to shoulder with such films as “Shaft” and “Super Fly,” “The Mack” and even “Mean Streets.” I believe the climax was influenced by “Taxi Driver,” and the film “Crossroads” also came to mind as a similar title. And for fans of Ron O’Neal, he is even better here than he was as Priest in “Super Fly.”