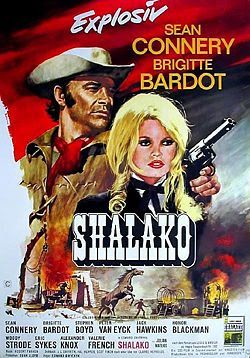 This offbeat Euro-Western based on Louis L’Amour novel concerns about Shalako (Sean Connery) whose Indian name means ¨he who brings rain¨ . He’s an US scout cowboy who intervenes to save European aristocrats on a hunting journey in New Mexico when they are attacked by Apaches circa 1880 .

This is a British Western set in Almeria (Spain) where in the 60s and 70s were filmed numerous Westerns , Shalako is a high budget but poorly directed . The gun-play , Indian attacks , shootouts are gripping but the movie is just another cold British product . Violent scenes abound as the attempt violation and murder of Honor Blackman . The casting is frankly magnificent but the film gets and incredible waste of a talented cast like happens with Sean Connery , though the first choice by the producers was Henry Fonda . There appears various main actors and secondaries usual in Western genre . Gorgeous Brigitte Bardot who played with Jeanne Moreau ¨Viva Maria¨ and with Claudia Cardinale ¨The legend of Frenchie King¨ . Stephen Boyd played Western as ¨Hanna Coulder¨ and ¨The Bravados¨ . Woody Strode at one of his habitual Indian roles as ¨Winterhawk¨ , ¨Loaded gun¨ , ¨The Gatlin gun¨ ,¨Keoma¨ , ¨Once upon a time..¨ . Julian Mateos , a famed Spanish actor , player in US Western as well as Spaghetti as ¨Hellbenders¨ , ¨Four rode out¨ , ¨Catlow¨ , ¨Return of seven magnificent¨ . Honor Blackman , pairing with Sean Connery in ¨Goldfinger¨ , here also makes love in a straw loft , this time with Stephen Boyd . Ernie Sykes playing a servant like in ¨The others¨ and Don Red Barry from Republic Pictures serial , ¨Adventures of Red Ryder¨.

Lively and spectacular musical score by Robert Farnon . Colorful cinematography by Ted Moore , he’s the cameraman of most classic period James Bond : ¨Diamonds are forever¨ , ¨Goldfinger¨ , ¨From Russia with love¨.. The motion picture is regularly directed by Edward Dmytryck who made ¨Alvarez Kelly¨ , ¨ Warlock¨ , ¨Broken Lance¨, ¨Raintree County¨ . For somebody is a monumental bore but I think is a fairly watchable European Western , nothing more . Succeeds only in waste a lot of talented actors , for Brigitte Bardot only .

0 64
Masters of Your Own Destiny