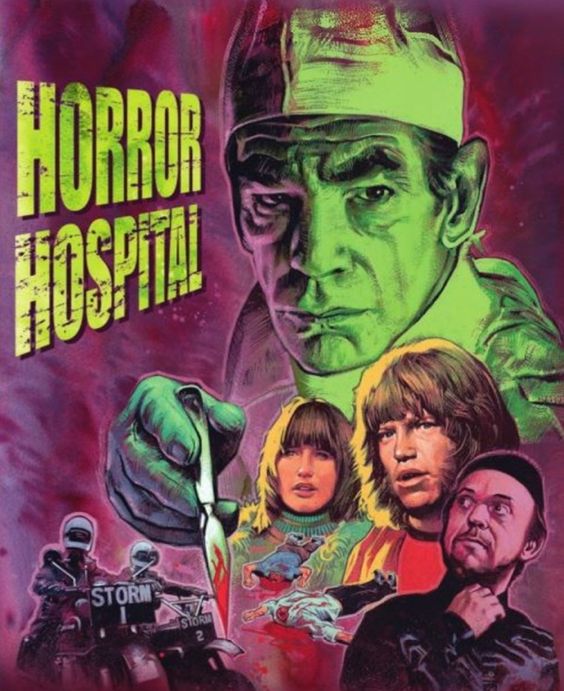 A worn out musician decides to take break and go a relaxing vacation. He chooses to stay at health farm located out in the country and on the way there, he meets a girl on the train going to the same place to see her aunty. The mysteriously mean, but crippled Dr. Storm, who’s performing brain surgery on the holidaymakers and turning them into his obedient zombies, runs the resort. When the two teens find out about his insane experiments and learn that’s their fate. They go out of their way to get away. But they not only have the doctor to face, but also his dwarf sidekick, an army of leather wearing zombies and that of a hideous monster.

Just wait a second, as I just pick up my jaw from the ground. Now, what was that all about!? “Horror Hospital” has got to be one of the most ridiculous and over-exaggerated horror films that I’ve ever came across, but you know what? I had a real ball with this blend of macabre and camp! That’s high camp of a VERY demented type. The praise that I’ve given makes it sound great and I had a good old time with it. Although, don’t be expecting anything particularly fresh and this deranged piece is one downright messy film that doesn’t have any idea of the word coherence. So from that point it recycles the same old formula and leaves a lot of things up in the air. The clichés and predictability flows freely, without any sort of constraints. Also forget about logic in the script and story as that’s thrown out of the window for absurd situations that don’t make much sense. Actually the whole film doesn’t make a whole a lot of sense, with the so many potholes and laziness. There’s so much going on in the plot that there’s such vagueness to everything and the problem is it tries to squeeze too much madness without explaining what happen before it and how it came to that situation. But all is forgiven because it’s so abnormal and hugely enjoyable. So, just go with the flow because if you try to decipher what’s going on, you’ll receive a splitting headache for your troubles. The whole mysterious awe about what’s going is just so hard to shake that I couldn’t keep my eyes off it.

The actual story is no more then a melodrama disguised as a Gothic shocker, which spurts along some exploitation and black humour along the way. Actually, the whole thing turns into a black farce with everything being poked fun at and the blood splattering is pretty much in a comic book state. Because of that the violence isn’t particularly gruesome and it doesn’t make you squirm, but the gratuitous bloodletting and nudity does run freely. Damn those leather-clad zombies really do like to hand out a beating! The great thing about it is that everyone involved knows how stupid it really is and don’t take the thing so seriously. The performances are plain awful and purely amateurish to say the least. But it’s Michael Gough’s hellishly campy performance that steals the lime light as the crazy Doctor and Skip Martin as Frederick the dwarf adds a cheeky vibe to the film. The dialogue joins it with its ineptness. But even though these things are terrible there’s some energy amongst it and you can’t go wrong with the tongue-in-cheek approach it takes. Another strong feature is that of the setting. The resort, which more looks like a castle on the inside, has an oppressive awe about it and the grand Gothic exterior makes it look larger and menacing than it really is. Being isolated in the countryside helps provide such a brood atmosphere too. Although, it’s definitely hilariously bad, it still does have its eerie moments worked in. Also the robust score builds on the suspense and uneasiness greatly and the soundtrack is reasonably groovy. Well, what do expect from that era. Really, this is purely utter ham that breathes sadism and sleaze in a very cheap way.