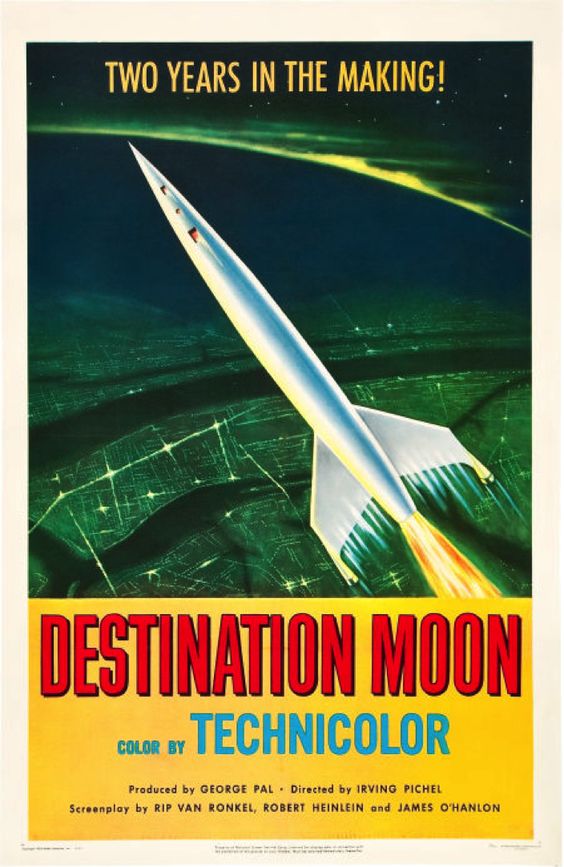 More historical curiosity than entertaining science fiction film, “Destination Moon” is a must see for those interested in the evolution of the genre and the political climate of the early cold war years. Don’t expect any cheap thrills or exploitation elements. There are no aliens, no monsters, and no hot women. Instead it presents a detailed speculation of what they thought it would be like to go to the moon in a rocket-ship. Despite looking like a massive version of a Von Braun rocket from WWII, the speculation about the problems faced by the engineers and crew of such a product are surprisingly accurate and must have been fascinating viewing back in 1950. Both the rocket and the moon are considerably more realistic than the old “Flash Gordon” stuff.

Like another science fiction classic “Them”, “Destination Moon” is loaded with political references conveying a not so subtle distrust of the federal government. But the two films convey the same message from polar opposite perspectives. “Them” placed the blame for its giant mutations on reckless atomic bomb testing and portrayed the federal response to the crisis as clueless until assisted by local law enforcement and an eccentric university scientist. “Destination Moon” has a hawkish perspective, with unidentified fifth columnists sabotaging America’s early space program. Fortunately, selfless patriotic industrialists come to the rescue and finance a successful private enterprise program to claim the moon for the United States.

The deliberately low-key documentary style is relieved by the last minute addition of space novice Joe Sweeney (Dick Wesson) to the crew. With a Brooklyn accent (his first view of earth from space elicits a desire to know who is pitching for the Dodgers that day) Sweeney provides both comic relief and an excuse for the expect members of the crew to expound in layman’s terms about the details of space travel. I couldn’t help thinking of “Dark Star’s” Sgt. Pinback whenever Sweeney began to whine about not belonging on the mission.

Another concession to the unsophisticated 1950’s audience has the project leaders making their pitch for financing through a special Woody Woodpecker space training film. The skeptical fowl and his two audiences receive their indoctrination at the same time. “Destination Moon” must have infused the nation with a sense of wonder and faith in what the free enterprise system could achieve because it is actually listed as an event in NASA’s chronology of the history of space travel. It is likely that the producers were more successful with this upbeat message than with their attempt to spread fear and promote a space race. Although considerable effort is made to sell the audience on the military value of the moon nothing very convincing is presented in that regard. Ironically, much of the actual space race a few years later would have a military purpose.

“Destination Moon” has two moments of suspense. The first is when Charles Cargraves (played by Warner Anderson) exits the ship in space and drifts away once his magnetic boots lose contact with the ship. Since Cargraves is the ship’s designer, it seems rather implausible that he should forget this but no more so than his constructing the ship out of heavy steel. The second is when they botch the landing and must lighten the ship to have enough fuel to return to earth (of course we 21st century viewers knew the thing was too heavy as soon as we learned about the magnetic boot thing).

Science fiction writer Robert A. Heinlein teamed with producer George Pal to put “Destination Moon” into production. They soon learned that Kurt Neumann was working to release “Rocketship X-M” in time to benefit from their publicity campaign. For legal reasons Neumann modified his more sensational film to feature a landing on Mars rather than on the moon. Although Neumann’s paid less attention to scientific details, it turned out to be more accurate in the use of a two-stage rocket and not the one-stage monster featured in the Heinlein/Pal version. Both films were subject to staggering naiveté about the complexity of space travel. Although the film’s version of the moon surface is hauntingly beautiful (thanks to Chesley Bonestell’s backdrop paintings) it looks more like a dried lake-bed than the actual lunar surface.

In retrospect, “Destination Moon’s” most unique sci-fi genre feature is the absolute refusal of its producers to show anything that deviated from what they believed at the time to be the truth about space travel. Although today it is a struggle to really appreciate the film, at least as it would have hit viewers in 1950, how many science fiction films have been criticized as being too real to be entertaining.