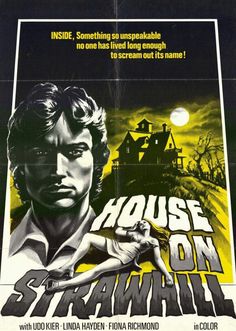 Intended as a cheap sexploitation/horror film, made for only £50,000, it’s interesting to discover what became of Expose – and consider what it might have been. The plot is good – better than an average episode of The Avengers, anyway. A writer (Udo Kier) rents a detached farmhouse in Essex and hires a secretary (Linda Hayden) to type his somewhat improbable manuscript.

There are low ceilings, claustrophobic surrounds and a small ensemble of performers including Fiona Richmond, who, as Kier’s girlfriend, stimulates him so much that during intimacy with her, he feels the need to wear latex gloves. It all augurs well, the soundtrack’s good too and I was pleased to see a vignette from talented Karl Howman, who I first saw in the exceptional National Youth Theatre production of Zigger Zagger.

The sex isn’t outrageous by today’s standards – though not quite the sort of thing you’d come across in Last of the Summer Wine. Funnily enough, I first discovered this film due to an innocuous appearance of Linda Hayden in another sitcom, Some Mother’s Do ‘Ave Em.

Her role in this is not dissimilar to that of Susan George in Straw Dogs; on one occasion, as she towers over her drunken employer, lying on the floor staring up at her, panic-stricken, I felt distinctly uneasy. Coming from Stanmore, near to where I grew up, she might at least have considered towering over me, after an evening of inebriation in a pub near the end of the Northern Line. Charlotte Rampling, a fellow actress from the neighbourhood, who appeared in The Night Porter, amongst other things, became a much bigger star. Linda could – and perhaps should – have emulated her. She was apparently disappointed Fiona Richmond enjoyed star billing on the posters and that the film was advertised as a skinflick. Fair enough, but perennial masturbation was not depicted so much in mainstream films in those days (these days, it’s almost compulsory, although most associated with American boys in teenage coming of age movies).