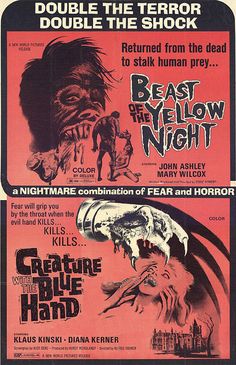 Klaus Kinski is the allure for this Krimi, another solid thriller with multiple twists and suspicious suspects, from director Alfred Vohrer concerning a series of murders associated with a wealthy family, & how they are in connection with an insane asylum whose psychiatric director is operating under the orders of a mastermind after an inheritance. The film opens with Kinski’s character, Dave Emerson, who is sentenced to life at an asylum for the murder of his gardener(..a murder he insists passionately he didn’t commit), and is released by someone who shortly afterward kills a nurse as he’s fleeing the scene. Dave’s twin brother, Richard, mysteriously vanishes upon his arrival at the family mansion..Scotland Yard detectives, Inspector Craig(Harald Leipnitz)and Sir John(Siegfried Schürenberg)discover Dave’s attempt to assume Richard’s identity, but work with him to identify a killer, donning a black cloak and hood(..with a hole cut out to see through), using a armor plated arm with sharp steel claws that extend(..the blue hand, designed from blueprints drawn up by Dave who is a successful sculptor of mannequins among other things). The “creature with the blue hand” seems to be targeting Dave’s family members, his brothers are killed and sister Myrna(Diana Körner)only escapes near death twice. Soon the asylum director, Dr. Albert Mangrove(Carl Lange), a colorful villain with a monocle, has Myrna kidnapped, often talking over the phone with his boss behind an operation to retrieve a fortune left to the Emerson family by their deceased patriarch, attempting to force her signature on a document, with her refusal being possible death..attempts to frighten her into signing include being thrown in a prison with dangerously violent lunatics and a padded cell containing a plastic cage housing an army of rats(..also part of the punishment includes the release of multiple snakes). Working with Dave, who temporarily takes Richard’s place as he oddly remains out of the picture, Craig will attempt to uncover the killer and mastermind behind the kidnapping of Myrna.

As any good Krimi film, there is an extremely convoluted plot yielding lots of suspects and red herrings, and some intriguing twists which reveal the complex scheme as it unfolds with our detective, Craig, getting to the bottom of the mystery..who would want the Emerson kids dead and how is Mangrove involved? There’s another neat disguise and weapon for the killer, the intimidating armored arm with claws that often are buried deep into the chests of victims. You have any number of suspects who could be behind the murders such as Lady Emerson herself, a sneaky butler who is always spying on people in the mansion, the family’s lawyer, and even Kinski’s two brothers themselves. The film does take away doubt that Dave’s behind the scheme as he works closely with Craig, but what about his brother Richard? Lange’s sinister Mangrove is as much a memorable villain as the “creature with the blue hand”, with his methods for disposing of those who get in his way such as a nurse attempting to expose his corruption or his torturous methods towards Myrna, trying to get her written signature. The monocle and his unflinching willingness to harm people certainly craft Mangrove as a slimy, cruel heavy wielding a lot of power thanks to his position and authority. Through his position as a director of an asylum(..and the authority to pronounce people insane even if they aren’t), he indeed has methods at his disposal for dealing with folks others want out of the way. Thankfully Schürenberg’s nincompoop Sir John doesn’t figure prominently in this particular Krimi, a goofy source of comedy often standing in the way of the more reliable detective(..Craig in this case)with a firm grasp on how to solve the difficult case in front of him. While Kinski has two roles(..although, Richard isn’t involved in the movie that much, except in terms of the central plot), he is more of a supporting character assisting Craig in catching the culprits behind the highly complex scheme to get at an inheritance. The mansion has a nifty secret passageway which offers the killer a method of travel(..and this method of travel figures into how Dave was set up for the murder), and the asylum is established as a repellent and unnerving place where you certainly don’t want to wind up. The story-line keeps you honest all the way to it’s wacky conclusion..fans might tell you that the Krimi genre is much like Scooby Doo mysteries as those responsible are unmasked as the detective gathers the remaining suspects, unveiling the mastermind to our amusement.