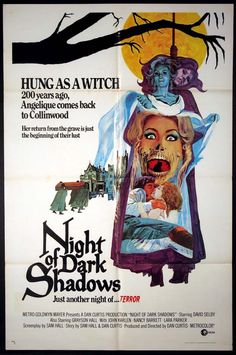 Night of Dark Shadows was Dan Curtis’ follow-up to the immensely popular movie from the hit soap opera Dark Shadows. This movie reinforces many known facts about sequels. Sequels always have much to overcome. They are invariably compared to the original. If the movie is a carbon copy of the first, it’s criticized for being un-original. If it takes a different road, the public laments that it’s not what they wanted. Dan Curtis deserves much never received praise for taking an entirely different road to Collinwood this time and risking the public’s ire. At the time of it’s release, Night of Dark Shadows received undeserved criticism for being slow and disjointed. The probable reason for this was that Dan Curtis was forced to edit Night down to a double-feature friendly running time, so much of it’s plot and character explanations landed – guess where – on the cutting room floor. However, if one really watches this film closely, they will be richly rewarded with a delightfully moody and atmospheric haunted house/possession/witchcraft flick that will send chills where they should go during a horror flick. David Selby is stoic and forboding as Quentin and Charles Collins, and Kate Jackson is the embodiment of purity and goodness as Tracy. Grayson Hall plays Carlotta with sheer relish. She’s the kind of housekeeper that motivates one to become a better housekeeper, so that we can one day fire her. Lara Parker will make you forget to inhale or exhale as Angelique. Her beauty is indescribable, as is her ability for evil. John Karlen returns as Quentin’s best friend Alex, and Nancy Barrett is approachable yet truly seductive as Alex’s wife Claire. They are simply a joy to watch together. Once again, the elegant Lyndhurst mansion is the perfect home for the Collins family, this time a haunted one. If you haven’t seen Night of Dark Shadows yet, give it a try. If you have and weren’t impressed the first time, give it another chance. It deserves that much – and you’ll be glad you did.