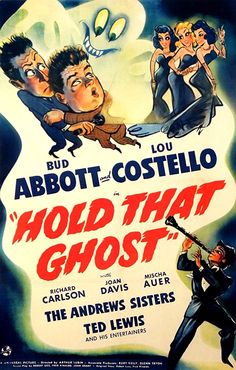 This combination of haunted house scares and A&C slapstick works terrifically, for several reasons–the supporting cast is first-rate, and Joan Davis proved to be the best comic foil Costello ever had, their scenes together sparkle and their chemistry is undeniable; the boys’ timing, always a marvel, has seldom been better; and, as in their best film, “A&C Meet Frankenstein,” the spooky elements are played exactly that way, and not for laughs, and it works as well as it did in that film. Also, it doesn’t have the cheaper, rushed look that many of their later ones had, and director Arthur Lubin–responsible for some of the team’s best pictures–keeps things running very smoothly. The boys showcase some of their classic routines, Joan Davis is a joy to watch, the Andrews Sisters’ songs don’t slow things down (“Aurora” is actually a bright, catchy little number); all combine to make this one of the best Abbott & Costello films. Don’t miss it.