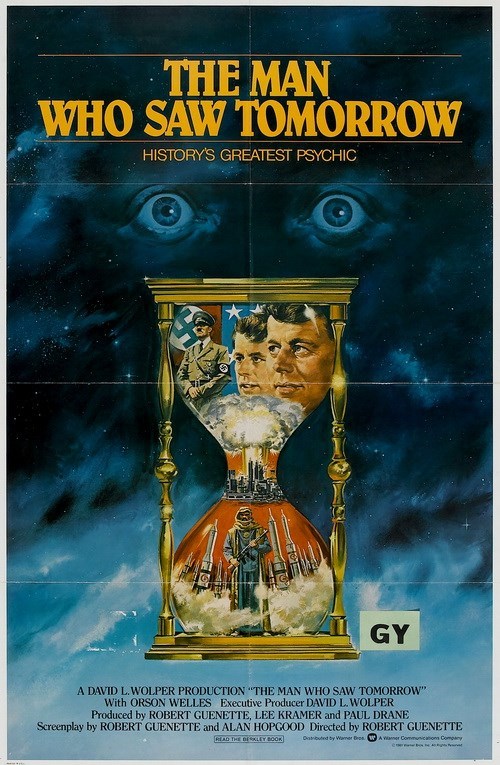 I guess my view of the prophecies of Michel de Nostradamus – the 16th century French prophet who is said to have written down accurate predictions of at least 2000 years of forthcoming human events – hold about as much weight as for me as something like The Da Vinci Code. There are a lot of holes in the Nostradamus’ predictions so I tend to chalk it up as nothing more than an interesting curiosity.

The documentary The Man Who Saw Tomorrow doesn’t see it that way. Here is a movie that offers a tiny bit of biography about the supposed prophet, and then cobbles together footage from every source under the sun in an effort to prove his accuracy. Did he have fore-knowledge of the future? Did he accurately predict The French Revolution? Napoleon? The American Revolution? The Civil War? The rise of Hitler? World War II? The Atomic Bomb? The Kennedy Assassination? The Moon Landing? Is he also right in his prediction about World War III and the end of the world? Well, I don’t happen to think so, but I am confused about whether the movie does. It spends 90 minutes reiterating that Nostradamus wrote down 2000 years worth of prophecies that came true and then adds a tag at the end to tell us that the producers of this film are actually less convinced of his accuracy than I am.

Hosted by Orson Welles, who sits in his stuffy office behind a desk smoking a cigar, The Man Who Saw Tomorrow attempts to lay out all of the major turning points of history by way of Nostradamus’ writing. Before diving head-long into his predictions, we learn that Nostradamus was a hard working student who had ambitions to be a doctor but after losing his family in the plague, turned his ambitions toward writing down his predictions in quatrains, hiding his verses in anagrams and secret code in an effort to avoid being prosecuted for witchcraft. Early on, we learn, he kissed the robes of a young Franciscan friar who would someday be Pope Sixtus V. Later he was invited to the home of a dignitary where he accurately predicted which pig they would be eating. Curiously, he forgot to jot those things down.