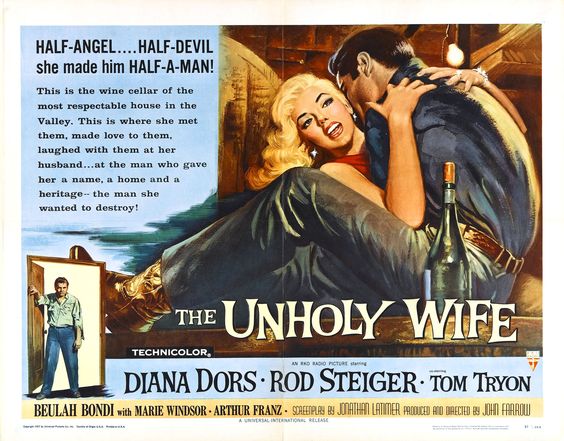 For some reason this film has a “B-movie” quality about it and I think it has something to do with the lead actress, Diana Dors. Although some have referred to her as, “the English Marilyn Monroe”, she just doesn’t seem to have the “on-screen presence” that Marilyn had. At least, I don’t think so. Because of this, while she is certainly very pretty, I never quite got that intrigued with her performance in this picture. Her acting seemed kind of bland and “wooden”. Be that as it may, in this film she plays “Phyllis Hochen” who is the conniving wife of a rich wine-maker (“Paul Hochen”) played by Rod Steiger. But she doesn’t love him. Instead she is having an affair with a local rodeo cowboy named “San Sanders” (Tom Tryon). Being terribly unhappy with Paul she schemes to get rid of him. Anyway, so much for the plot which is pretty basic and has been used any number of times. While I don’t want to sound terribly negative, I will say that one thing I didn’t care for was the technique used which had her telling her story from a jail cell in the past tense. Now, I realize that this is a typical film-noir technique but (when used) it often seems to take some of the mystery out of it