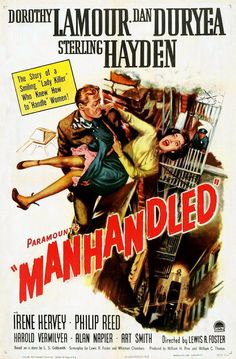 A stuffy novelist (Alan Napier) suffers recurring nightmares that he bludgeons his rich jewel-horse of a wife (Irene Hervey) to death  with a `quart’ bottle of cologne. That’s bad enough, but what’s worse is that he confides his dreams to a shrink (Harold Vermilyea). Didn’t he know that it was the 1940s, when psychiatry was little more than a hotbed of scheming quacks? So when his wife inevitably winds up dead (and her diamonds stolen), he becomes the prime suspect, even though she had been out clubbing with another man (Philip Reed).

That’s the uptown side of Manhandled; there’s a seedier angle as well. The psychiatrist’s transcriptionist (Dorothy Lamour) not only sits in on his sessions but later climbs the stairs to her Manhattan walk-up and spills the beans to her neighbor Dan Duryea, an ex-cop now doing repo jobs and divorce frame-ups. So much for codes of confidentiality. But when a signet ring she found while vacuuming her sofa and then pawned brings the police to her door, along with insurance investigator Sterling Hayden, it starts to look bad. It doesn’t help that she just blew in from Los Angeles with forged letters of reference….

Manhandled unfurls an elaborate, and none too plausible, mystery plot competently enough, even with a few skillful touches (in its final quarter, it takes a sharp turn toward noir, and better late than never). Director Lewis Foster, however, failed to optimize the solid cast he was handed: Hayden’s part never comes into clear focus and Lamour plays little more than a bland patsy. Duryea dominates, with his familiar two-faced persona as the cheery suck-up who likes to slap women around; Art Smith, as the comic relief of the police detective, becomes, after Duryea, the movie’s most memorable character. It’s not a bad movie, despite a couple of clunky flashbacks. But in better hands, it could have become one of the better noirs. As it stands, it merits that dark and honorable designation only by the skin of its teeth.