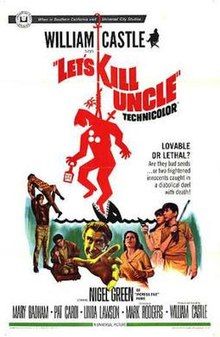 Though it starts off somewhat slowly, things instantly pick up when Nigel Green enters the scene. He is a hoot as the coniving uncle, and his various activities (like practicing judo in the house) and dialogue are hilarious (the breakfast conversation with his nephew is the best such scene. I would say the movie gets better as it goes along, getting more twisted with its black comedy. However, the final minute of the movie is a real disappointment. It’s as if the screenwriter was running out of time to submit the script to the studio, and wrote in an ending both strange and feeling unfinished.

It’s still worth a look – if you can find it. It seems that Universal has withdrawn the movie for some reason, and currently the only way to watch the movie is through bootlegs. Perhaps the current owners of the studio are uncomfortable with the whole uncle-trying-to-kill-nephew/nephew-trying-to-kill-uncle thing, even though all this is never presented in a serious manner. Let’s hope they eventually find a sense of humor.