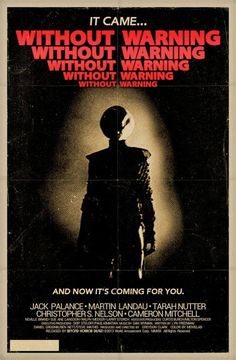 “Without Warning” is a cheap American b-movie horror from 1980 about the terror striking the beautiful American countryside… some people are brutally killed and mutilated by an unknown stranger, and it’s the turn of a bunch of teenagers and war veterans to find out that an illegal alien has landed and is hunting for humans for his horrible collection…

Although this movie shows lots of stereotypes and well-known topics from many horror movies from the 50’s to the 70’s like “It Came From Outer Space”, “The Thing”, Jack Arnold and Roger Corman cheapos, “Night of the Living Dead”, “The Texas Chainsaw Massacre”, “Three on a Meathook” and even “Alien” and the new wave of high school slasher movies like “Halloween” and “Friday the 13th”, it’s an entertaining and thrilling affair.

There are some old movie veterans like Jack Palance, Martin Landau, Ralph Meeker, Cameron Mitchell and Neville Brand involved with Palance and Landau playing the mad alien hunters, and a young David Caruso in his very first movie role. The alien is played by Afro-American actor Kevin Peter Hall who also played the monster in “Predator 2” (1990). Director Greydon Clark never had a big break-through movie, but photographer Dean Cundey had a big time in the nineties with jobs for “Apollo 13”, “Casper”, “The Flintstones” and the Spielberg hits “Hook” and “Jurassic Park”.

All in all it’s a nice midnight movie and a small highlight for fans of seventies’ paranoia horror films in the wake of the remakes of old alien, monster and disaster film productions. No more, no less.