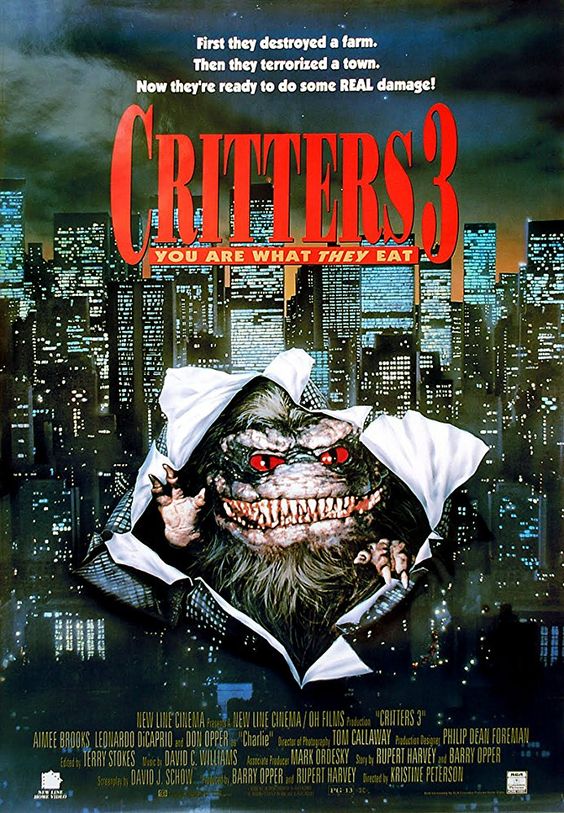 The DVD-cover suggests that – following two episodes set in the remote Kansas countryside area – the Krites will now be spreading fear and terror in the big city, but the truth is they never get any further than running amok in a ramshackle old apartment building and frightening a handful of its tenants. Part three in the series is an okay time-waster, but very forgettable and obviously lacking the joyous and charming spirit of the first two films. It sometimes seems that, with entering the 1990’s, it suddenly became impossible to make cheesy & light-headed horror like they did in the 1980’s. Oh well, at least number three is still a dozen times better than the truly awful fourth installment, which was shot back-to-back with this one and takes place in outer space. “Critters 3” particularly marks the further and irreversible descent of the franchise into comical territory. Mainly due to the eccentric design of the monsters – courtesy of the amazing Chiodo Brothers – the series bathes in a light-headed and silly atmosphere, but the two previous films nevertheless found a better balance between the comedy aspects and genuine horror. Here, the little supposedly ravenous and evil creatures almost look like tiny stand up comedians. They giggle non-stop, eat beans and fart, watching cooking programs on TV and entertain themselves with food fights. Meanwhile, a bizarre posse of low-keyed tenants (among them THE Leonardo DiCaprio in his very first long-feature film) attempt to escape the Critter-terror through fleeing to the roof. Why they just don’t go out via the front door, I don’t know Don Opper reprises his role as bounty hunter Charlie, and he seems to get more imbecilic with every episode. I don’t really feel like mocking DiCaprio’s appearance becau