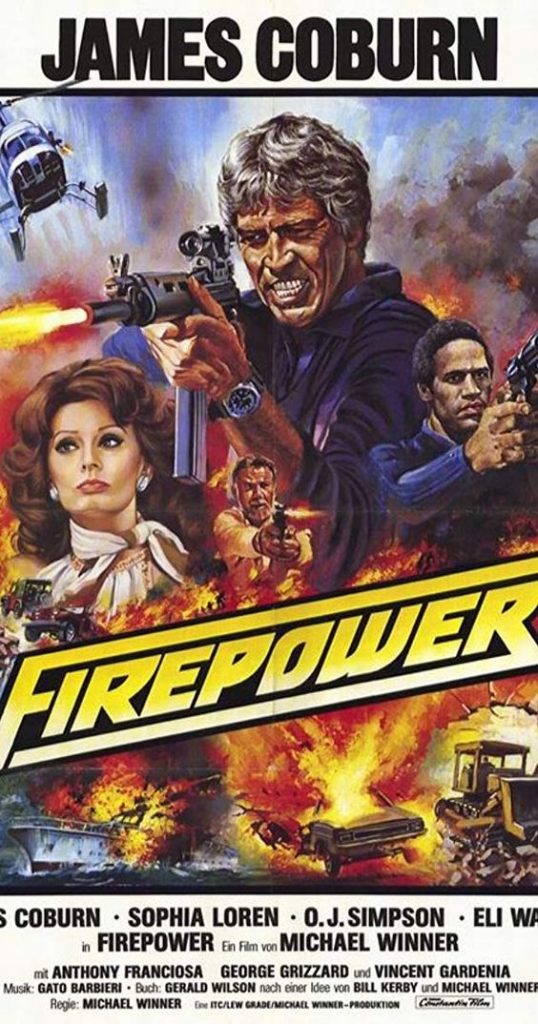 Michael Winner’s films aren’t complete without a lot of blood, and this one has enough to fill a bucket or two.

James Coburn is the retired hitman who comes back in to kidnap a certain Karl Stegner, a mysterious and very wealthy man wanted by the IRS and various other federal agencies.

Coburn teams up mainly with OJ Simpson, with some dubious assistance from Sophia Loren, and we have a 70s high-tech sort of caper. Lots of gadgetry, most of it explosive, large quantities of double-crossing and shooting, plenty of pretty shots of the Caribbean from floating gin palaces, and a plot of such ludicrous over-complexity that it’s silly.

It was obviously immense fun to make: several very large houses get burned down, bulldozed and otherwise trashed. As do various means of transportation. With lots of explosions and shooting.

It’s implausible and it’s almost impossible to understand why anyone would do what these people do, but apparently this is what they do. Bullets fly and things blow up.

There is an awful lot of frenetic activity, constantly accompanied by the sound of gunfire with regular scenes of conflagration.

Did I mention that there’s a lot of shooting and explosions in this? In case I didn’t, there is, as well as a very confusing plot.