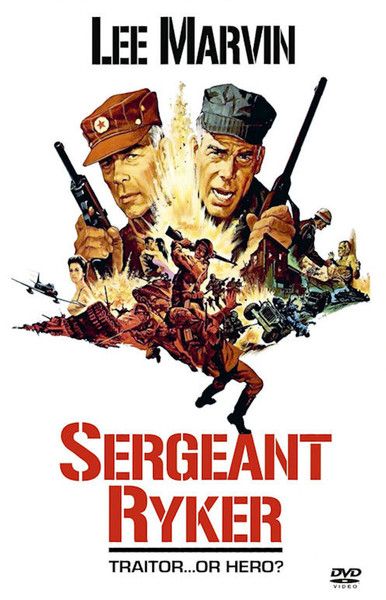 Engaging, riveting tale of captured US army turncoat who has to prove his innocence to avoid the hangman. Paul Ryker dodges friendly fire in a seemingly doomed attempt to convince a military court that he was actually a US spy on a secret mission in Korea. In the vein of classic courtroom dramas, “Sergeant Ryker” is an extremely well crafted mystery, ably guided by an outstanding cast, director Kulik’s constant momentum, and effective plot twists and turns.

This film was originally made as a television movie in 1964, and subsequently beefed up for this revision with the presence of many “name” actors, and some action sequences. Dillman, reprising his role, is spot-on as the doubting defence attorney, whose attentions sometimes stray to the personal plight of Ryker’s supportive, yet somewhat distant wife, played with aplomb by Vera Miles. Rounding out the frontline is Peter Graves for the prosecution, and Norman Fell and Murray Hamilton in key supporting roles.

Marvin’s interpretation of the Paul Ryker character is a balanced depiction of a simple but dedicated man whose normally laid back demeanour is challenged by the desperate circumstances in which he’s placed. Marvin switches perfectly from resigned indifference, to impassioned denial of the charges, giving a convincing, often intense performance that is the highlight of this otherwise small-scale drama. It’s this performance that should elevate the film to a platform where it occupies a place on the best-ever lists of courtroom dramas.

However, despite its apparent obscurity, “Sergeant Ryker” still remains a taut and compelling examination, like a book that you just can’t put down. Highly recommended.