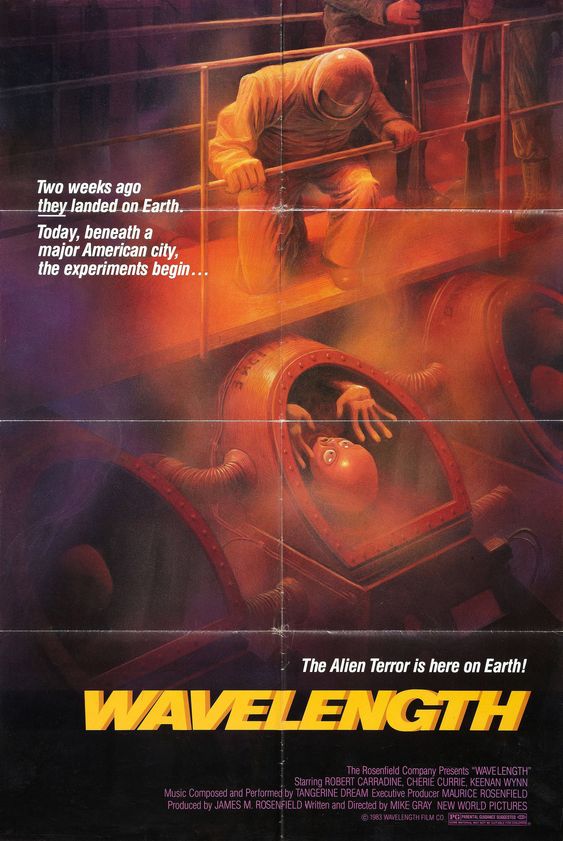 I love to debate with those who claimed this was a rip-off of E.T… While E.T. was good, it was obviously more cute with cute kids and a cute alien. Wavelength is much more adult. I didn’t see this as the same film as E.T. at all, if anything, I found John Carpenter’s film Starman a replica of Wavelength–it came two years after Wavelength and had the EXACT same silver sphere spaceship hovering in the desert!!

The story of someone discovering aliens in a secret underground government complex may not be new, but it’s how the story is told and how the characters affect us that make it work. Robert Carradine is likeable and even sings a few of his own songs. Would have been nice to add those to the soundtrack CD, but I can’t complain about having this great Tangerine Dream score (particularly the Church Theme). Former Runaways band member Cherie Currie was a nice surprise in the cast–it’s a shame someone felt it necessary to exploit her by having her in a brief nude scene. It’s so cliche to have a naked woman get out of bed and never the man…it’s as if to say, yeah, we can pull in the male audience by giving them a naked woman to gawk at. Since this was from New World Pictures, I had to check to make sure Roger Corman wasn’t listed as producer since his name (like John Landis) automatically means breasts are mandatory. Keenan Wynn adds sass as usual to any film he’s in, and doesn’t disappoint.

The real stars are the aliens. It’s wonderful to see how much can be conveyed without dialogue! One particular moment of brilliance (and a nice comment on religious ideology) is when they are whisked into a church to hide and Carradine and Currie try to get the aliens to put clothes on to disguise them as children. At first the aliens won’t cooperate, but when they look up at a statue of Jesus on the cross (and seeing the despair on Jesus’ face), they quickly start to grab for the clothes! That scene deserves to be listed as one of the all-time best scenes in film. It’s important to note too that the minimalist makeup job for the aliens is very good, I didn’t notice any seams or wrinkles on the skin. They seemed naked, but who’s to say what beings from other worlds wear?

Nice pacing, believable performances, great Tangerine Dream score, and good use of location (yes, using the desert is economical, but the final sequence is a wow), and the emphasis on the drama of the situation instead of bombastic sci-fi visuals make Wavelength a worthwhile time. I’ve seen and forgotten many films in my life, and when a film like this is one you think about once in a while, then it did its job well.