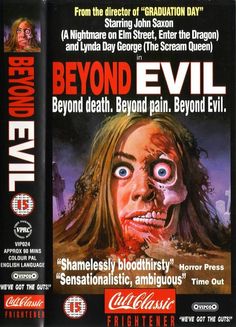 I first noticed the lovely “Linda Day George” in “Pieces” where she made bad-horror-movie history by screaming “BASTARRRRDS!” three times in a row to riotous effect. She’s not as overtly hilarious here (in fact, it appears she was probably a decent actor, generally) but she’s really the only reason I could recommend this relatively average flick. She rolls her eyes, runs around with an over-sized finger (don’t ask!) and, while possessed, does some seductive things. I knew it would be a fun movie during a scene early on where she walked around her apartment, anxious about the rain outside, then finally threw her things down and yelled, “DAMN!” with what seemed like every emotive power she ever learned in acting school! Strassberg would’ve been proud. And I can’t look away! Linda had some great moments later too, but that single moment was the most (unintentionally) funny.

Another nice surprise, during the opening credits I heard this overwrought, sweeping score with lots of strings and lots of starts-and-stops…I thought, “My this sounds like Pino Donaggio!” And it turned out it was! Another satisfying score from the almost-always dependable Pino, who appears to be the busiest composer in history. Most of his usual touches are here–great chase music, an achingly beautiful “love theme” and a finale that leaves you feeling somehow sentimental even if the movie was total crap.

Which this one pretty much was. John Saxon is great–especially kicking ass and going, “Stay!” to a would be attacker. He’s cool and this film didn’t hurt him a bit, thankfully. Otherwise there’s not much here in this “would-be” giallo: **a crossed-eyed ghost woman with green laser eyes **no sex and minimal gore, although what there is was pleasantly repulsive **terrible effects **slow pace **sloppy editing **plots stolen from “Amityville,” “Exorcist,” “Beyond The Door” and especially “Suspiria,” and **no surprises, really. It DOES have some hilariously bad deaths though, if you’re in the mood, which I usually am, and if you can stay awake. The death of a guy in a “posessed” car that’s barely moving is not to be missed–especially when he spontaneously explodes into fire, but continues to scream! I don’t know who Herb Freed was or why he was making cheap horror movies, but this is not the WORST movie ever. Keep the fast-forward button handy and this is an enjoyable piece of mind-sludge