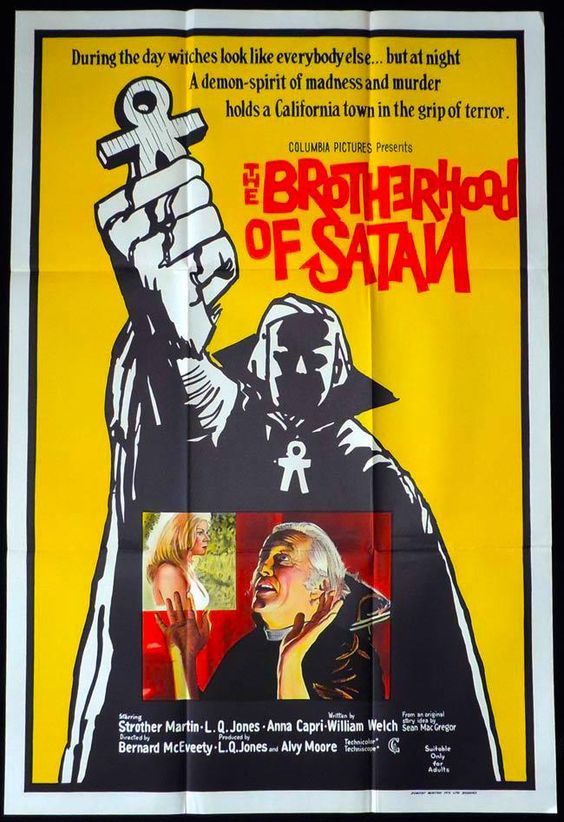 This totally odd-ball feature is a typical and prime example of satanically shocking 70’s horror. The events are thoroughly confusing and it takes up quite a while before you figure out what the hell is going on, but the brooding atmosphere sucks you in immediately. Right from the indescribably bizarre intro, showing a couple of eerie children turning toys into real-life war machinery, you just know this become an uncompromising and gritty shocker. “Brotherhood of Satan” soon appears to be another installment in the alleged & unofficial “creepy little town hiding a dark secret” sub genre. A young widower, traveling with his new yummy girlfriend and 8-year-old daughter, stops in a remote little town to report a car accident they witnessed on a nearby highway. The villagers behave very hostile and insist the visitors on leaving right away. The town clearly bathes in an ambiance of fear and panic, as local children vanish inexplicably vanished and unnatural forces maintain everyone within the boundaries of town. Hillsboro is in the grip of a satanic cult, apparently ruled by the elderly members of the community. I really liked “Brotherhood of Satan” a lot. The story reminded me of a novel written by John Saul, but I can’t remember the title. It also dealt with a cult of elderly people abusing youthful villagers for their own greedy merits. The film mainly relies on creepy scenery (like dolls and witchcraft relics) but a slightly more involving and coherent screenplay would have been nice. The subject matter often raises a lot of issues and questions, and director Bernard McEveety can’t always provide us with answers. The climax is terrific, very seventies (meaning shocking) and unforgettable. Beautifully shot film, too.