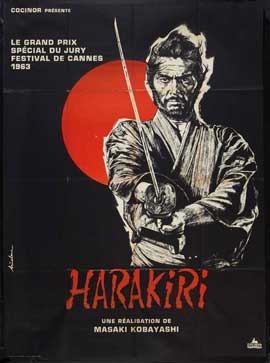 This film is the purest distillation of the spirit of Greek tragedy ever put on celluloid. Yes, this is a review of Seppuku, a Japanese film released in 1962. Perhaps it took a non-Westerner, free of all of the cultural baggage and ridiculous associations, to see straight into the heart of the tragic mode and make it palpable and alive in the twentieth century. That is not all: the black and white cinematography is both formally assured and often outrageously daring; the soundtrack is one of the finest efforts of the greatest Japanese composer of the 20th century (or any century for that matter); the acting is demonically inspired; and the narrative is relentlessly gripping and involving. The film illuminates the relationship between the individual and society and between society and history. It is a tender meditation on familial love and the ties of friendship that transcend even death. This film will cut open your bowels, pull your soul out, and force you to stare it in the face. There may be other films that attain similar heights, but I cannot imagine any film, ever, being more perfect. Forget Citizen Kane, Seven Samurai, the Godfather, etc. etc. all of those commodified canonical works that everybody raves about because everybody else is raving about them.