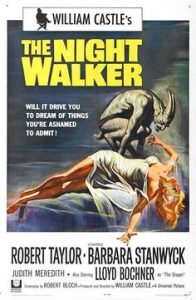 Wealthy widow in Los Angeles dreams of a handsome mystery man who romances her–also of the walking corpse of her blind husband, who may not have perished in an explosion as she was told. Robert Bloch was the writer William Castle wanted to work with most. Bloch, who helped bring new shocks to the screen with his novel “Psycho”, came up with a fairly straightforward thriller here, one that producer-director Castle then marketed his own way (“Are you afraid of the things that can come out of your dreams…Lust. Murder. Secret Desires?”). However, just because “The Night Walker” is relatively gimmick-free doesn’t mean it’s a washout. Far from it, as Barbara Stanwyck is very good in the leading role, creating a savvy, quick-thinking businesswoman who is also prone to screaming fits (the latter trait doesn’t quite pay off, as Stanwyck just isn’t a Scream Queen). Eerie thriller on a low budget has a quietly menacing ambiance that is intriguing. Vic Mizzy contributes one of his finest background scores to the film, and the cast is full of pros, including Robert Taylor, Stanwyck’s real-life ex-husband. The kitschy opening about the world of dreams is pure William Castle (and has next-to-nothing in common with the movie that follows), but there are many amazing sequences here to cherish.