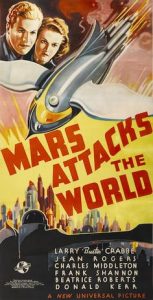 To make “Mars Attacks the World”, they edited together selected pieces of the serial “Flash Gordon’s Trip to Mars” (which had something like 15 episodes or so), keeping the main story line intact. The result is very fast-paced and sometimes chaotic, but it enables you to see the story all at once. It’s an old-fashioned, comic-book sci-fi story, carried mostly by Buster Crabbe’s energetic portrayal of Flash Gordon.

While most of the story is quite far-fetched, there were a lot of creative ideas, at least given the era, so that you never know what is going to come next. This edited version moves very quickly, so that you will always want to see the next scene.

These old Flash Gordon stories were very popular in their time. For those who are not big fans of comic-book style science fiction, this version gives us a good chance to see what it was like, without having to watch the full-length serial version.