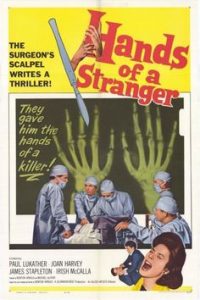 talky script and some overacting in key scenes doesn’t help put the viewer in the right frame of mind to enjoy this oft told story of hands that are sewn onto a pianist after he loses use of his hands in an accident.

Nobody in the cast has any “name” value and I see that in many of these reviews people are confusing the leading male characters by crediting the wrong names of the actors.

For clarification, it’s James Stapleton who plays the pianist with a sensitive but expressionless face. His looks are reminiscent of Hurd Hatfield’s in “The Picture of Dorian Gray” who also kept a mask-like facial expression. The doctor is played with slightly more animation by Paul Lukather and has a more sympathetic role. The victimized Stapleton resents the doctor’s surgery to the extent that he becomes arrogant and spiteful enough to emerge a killer.

Some of the B&W photography is in the film noir category but everyone is let down by an uninspired script and less than polished direction.